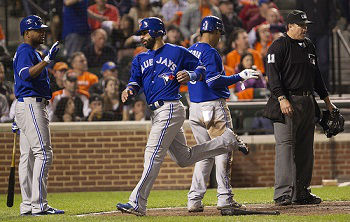 The most recent installment of the well-documented battle featuring José Bautista and Darren O’Day took place Sunday, April 12th as the Blue Jays defeated the Orioles 10-7. Generally speaking, Bautista can claim the upper hand, having gone 5 for 15 (.333) with four homers, eight RBI, and a 1.633 OPS including Sunday’s contest – but this feud extends beyond the box score. During a game in June 2013, Bautista took O’Day’s celebration personally after the reliever struck him out and the two had words as the inning concluded. The next day, Bautista took O’Day deep and more words were shared as he rounded the bases. Last season, pleasantries were renewed when O’Day plunked Bautista as retaliation for a hit batsman on Baltimore’s side earlier in the game. This entertaining rivalry has stretched into its third season but long before the two became adversaries a connection between José Bautista and Darren O’Day was formed in April 2009.

On April 22nd, 2009 the Texas Rangers visited the Toronto Blue Jays for a relatively meaningless early-season Wednesday night game in front of a paltry 13,090 at Rogers Centre. Darren O’Day was with the Rangers at the time, and Bautista, the Blue Jays. Bautista had not yet morphed into the perennially dangerous hitter he is today, though he was 4 for 5 that day hitting in the nine-hole. Darren O’Day also pitched that game, but did not face Bautista. He didn’t even factor into the decision, an 8-7 loss to the Blue Jays. So what was so significant about this particular game?

O’Day was called upon to make his first appearance for the Rangers in the eleventh inning. Bautista was in the hole at the time. It was a forgettable debut for O’Day – he gave up a walk-off single on a 2-2 pitch to Kevin Millar, the first and only batter he faced. But that wasn’t the lone misfortune O’Day was forced to endure that night. That afternoon, Texas claimed him off waivers after he had been designated for assignment earlier in the week. He arrived at Pearson Airport in Toronto during the eighth inning and as the game entered extras, it became apparent that O’Day might actually be needed to pitch that night. He arrived at the ballpark in the tenth inning ready to take the mound if needed. He got the call the following frame. The only problem was the Rangers didn’t have an “O’Day” jersey made up for him. When he entered the game, he was wearing the jersey of Kason Gabbard, then a Triple-A Oklahoma City player. The walk-off simply added insult to injury.

It seems incomprehensible that something like this could happen in the big leagues but at the beginning of the day, O’Day was not a current roster player, nor was he a potential candidate for a Triple-A call-up – he wasn’t even a member of the team. It was such unlikely happenstance for several reasons: the fact that the Rangers claimed O’Day of all players and at the time they did. That O’Day was able to even get to Toronto based on flight availability and there were no delays. Furthermore, the only reason he was required was because the game went eleven innings and the Rangers needed to conserve arms as much as possible. The possibilities are endless in terms of other outcomes that could have materialized that day. Any one of them would have spared O’Day both the embarrassment of making a debut in the wrong jersey and giving up the game-winning hit five pitches after meeting your manager for the first time.

Bautista is the only remaining Blue Jay from that day’s lineup and perhaps he silently enjoyed the embarrassment and frustration O’Day must have felt as he took the field without a proper jersey and then promptly watched Vernon Wells cross the plate on Millar’s single. Neither was a well-known entity at that time, and was probably only vaguely aware, at best, of the other’s presence and career path. The rivalry that has lasted into a third season actually has roots essentially six years ago to the day. Perhaps it comes up when they exchange words, maybe Bautista can’t quite put his finger on where the two have intersected previously, or maybe sufficient time has passed for this fiasco to slip under the radar in baseball circles – unless his current teammate, as he was that night, Chris Davis occasionally reminds him of it. It does help however, that Kason Gabbard won’t be giving any interviews on this anytime soon – he last played in the Majors in 2008 and finished his career in the Minors for Boston in 2010.