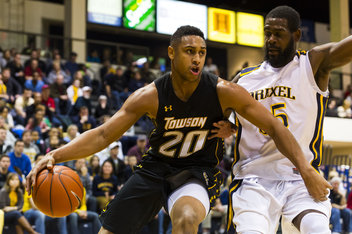 The Towson Tigers went 1-31 just two seasons ago and they were the laughing stock of division 1 men's basketball. Little did the Tigers know that they had their savior waiting in the wings sitting in street clothes, witnessing the season that will go down in infamy for Towson.

Jerrelle Benimon played his first two season of D-1 basketball for the Georgetown Hoyas, but limited playing time made Benimon question his standing on the team. Jerrelle decided he wanted to transfer and as he sifted through the countless offers he settled on the Towson Tigers, because they made him feel like he could be the future of the team.

Benimon sat out the entire 2011-2012 season and it must have been a very tough year for the young man. Jerrelle had just left Georgetown where he was never able to live up to his own expectations and then he had to watch and practice with a team that could only manage one win during a 32 game season.

Going into the 2012-2013 season, not much was expected out of Towson and even Benimon flew under the radar as he wasn't even a pick to make the All-CAA team. The Tigers went on to have the biggest turnaround in college basketball history as they improved from 1-31 to a much more respectable 18-13 mark during the regular season.

Benimon was the major reason for the drastic turnaround as he earned CAA Player of the Year while also being selected to the CAA All-Defensive team. Jerrelle averaged 17.1 points, 11.2 rebounds, 2.5 assists, and 1.9 blocks per game while being effective not only inside the arc, but also shooting a very respectable 40.8 percent from deep.

Towson is now on everyone's radar and they just earned their first top 25 vote in program history this past week after they opened with two dominating wins over Navy and Morgan State. The Tigers rectified their own hype by beating Temple for their third straight win to start the 2013-2014 season. Benimon almost single handedly led the Tigers back from a 45-53 deficit as he scored 7 points to spark a 12-3 Tiger run which gave them the 62-20 lead.

Jerrelle tallied 32 points and 10 rebounds, and he also salted the game away against the Owls making 10-12 free throws as Towson went on to beat Temple 75-69. Benimon is taking on a "LeBron James" type role for the Tigers as he can post up, run the offense as a point forward, and he can get his shot from anywhere on the floor, while also being a threat to drive the lane with dangerous authority.

Towson is the preseason favorite to win the CAA and it seems almost impossible to think any player other than Benimon will win the conference POY. The Tigers have the talent around Benimon to make them a serious threat to become a bracket buster if they can make the Big Dance. If Towson continues to build their resume in the non-conference they could even get at-large consideration come March.

The Towson Tigers are one of the more remarkable turnaround stories in college athletics and they are a team everyone should consider rooting for over the coming month. Seeing the exuberance of the Towson players after they completed the come from behind win over Temple showed just how much this team wants to succeed.

Keep an eye on Towson as they take on the Kansas Jayhawks on November 22nd. This is a great opportunity for the Tigers to prove themselves on the national stage and they will peg their experienced roster against the powerhouse that is the Jayhawks at Allen Fieldhouse.