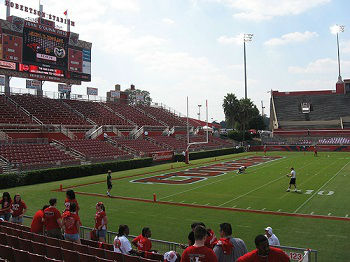 Along with Memphis, Houston returns the most starting players in 2014 and they look to build on a successful 2013 campaign. Freshman QB John O’Korn put up big numbers in 2013 and he should be ready to fire on all cylinders right out of the gate. Not only will the offense be dangerous, but this defense was underrated in 2013 and they return nearly everyone. Don’t be caught off guard when Houston makes a push to claim the AAC title in 2014.

East Carolina has a lot of hype coming into 2014 because they return QB Shane Carden and his top two targets who led one of the best offenses in the national last season. The Pirates are threats to win the conference on the power of their offense alone, but an average defense that only has 4 returning starters and an O-line that needs patchwork could hold ECU back. East Carolina will win games on offensive output alone, but I think they might struggle against other solid offensive squads that also have the defense to back it up, such as Houston.

With Louisville leaving the AAC in the offseason it is now Cincinnati’s turn to try and take hold of the conference where they are the best program remaining. The main change going into 2014 will be under center with Brendon Kay graduating and former top recruit Gunner Kiel coming in. Cincinnati will likely be improved on offense if Kiel can live up to his hype, but there will probably be a drop off on the defensive end after they ranked 14th in that national last season and they have to replace a number of key starters on the D-line and in the secondary.

UCF had a breakthrough season as a program in 2013 and they have propelled themselves into being one of the most attractive destinations for players coming into the AAC. It won’t be easy for UCF to repeat the kind of success they had in 2013 with Blake Bortles and Storm Johnson moving on to the NFL, but this team can still be solid on the back of their defense alone which returns 9 starters. Without a sure thing at QB I have to slide the Knights down to 4th in the preseason rankings list, but I wouldn’t be surprised if UCF threatened for the conference title on their defensive ability alone.

Even though QB Garrett Gilbert has moved on to the NFL there is still a lot of supporting talent left on the offensive side of the ball which will help whoever becomes the new full time starting QB for the Mustangs in 2014. If the defense can hold their own, returning 7 starters, then SMU will have a great shot to make a return to postseason play.

The Green Wave quietly made it back to postseason play in 2013 capitalizing on an easier schedule mixed with great defensive production. The offense didn’t do much to help the cause for Tulane in 2013 even with the defense generally creating great opportunities. Tulane played great in the middle of last season picking up 4 straight wins including impressive victories against UL Monroe, North Texas, and East Carolina. The defense allowed the fewest yards per play in CUSA last season and this team will be built around the success of the defensive unit. In a league with numerous pass happy offenses this is a secondary nobody will want to go against.

Temple should be one of the 2013 AAC teams that are greatly helped by the influx of CUSA programs along with Louisville moving on to the ACC. The Owls were competitive towards the back end of the 2013 regular season nearly pulling off upsets against teams like SMU, Rutgers, and UCF, but they had a tough time getting over the hump. Freshman QB PJ Walker developed into an incredibly consistent option under center and his maturation at the end of last season will pay dividends in 2014.

The Tigers’ best 2013 result came late in the season when they nearly knocked off Louisville on the road, but they closed the season in a forgettable way with a 10-45 loss on the road against UConn. Memphis actually boasted a respectable defense in 2013, despite the offense putting them against the wall time and again. The defense returns 9 starters and I think this unit can potentially keep Memphis out of the basement in the AAC. The offense should be somewhat improved with QB Paxton Lynch returning along with RB Brandon Hayes.

South Florida returns 9 starters to an offense that was completely dysfunctional last season scoring just 13.8 points per game on the average. The Bulls ranked over 100th in the FBS in average passing and rushing yards per game and USF won’t start winning games until they get more consistent result on the offensive side of the ball. There is some reason of Bulls fans to be optimistic however as they bring in the conference’s best recruiting class.

The Golden Hurricanes were one of the biggest disappointments in 2013 after being picked by many as CUSA preseason contenders. The offense was very inefficient under both Cody Green and Dane Evans, and the team won’t get better in 2014 until they get better play under center. I actually think the defense will see significant gains in 2014 with 9 starters returning and a good portion of the defensive struggles in 2013 were a direct result of the ineffective offense.

The Huskies opened 2013 losing by 15 points at home against FCS Towson, but they closed the season on a three game winning streak picking up victories against Temple, Rutgers, and Memphis. UConn closed their 2013 season against teams that didn’t have much to play for, so the significance of the wins is up for debate. With a new head coach brings a new system and this roster was also left with a lot of needs. There is reason to be hopeful with QBs Cochran and Boyle returning, but the O-line will almost certain be as porous as it was in 2013.