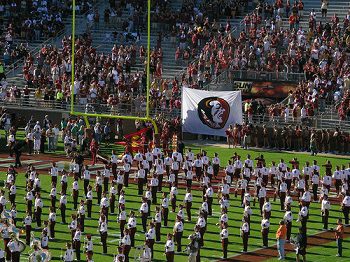 It is tough to be as dominant as Florida State was last season as they ranked 2nd in the nation in points scored and their defense allowed the fewest total points per game. Florida State ran right through their regular season schedule without much opposition and they sealed the deal with a come from behind win in the title game against Auburn. The Seminoles return their most important player with Heisman trophy winner Jameis Winston and as long as Winston is in town Florida State will be national title contenders. Florida State will reload on the defensive side with capable replacements, but it will be tough for the new guys to live up to what the 2013 unit accomplished. There are also question marks at receiver, but the run game is set with Karlos Williams and Dalvin Cook.

The Tigers have really come on strong as a program under Dabo Swinney, but they will be in rebuild mode on offense this season with Tajh Boyd and Sammy Watkins moving on to the NFL and they return just 5 starters to this unit. Clemson’s defense actually flew under the radar in 2013, but this unit will be called upon to do even more in 2014 if Clemson hopes to challenge for the ACC title. Clemson’s front seven should be one of the best in the ACC, but there are some question marks in the secondary.

Louisville was a contender for the national title in the first half of last season, but as the year progressed it became clear their 2013 squad wasn’t quite up to the level to contend at the highest level. In the offseason head coach Charlie Strong took the head coaching job at Texas and QB Teddy Bridgewater was taken in the first round of the NFL draft. The offseason brought much change with Bobby Petrino coming back in a controversial hire and the Cardinals moved over to the ACC. There is no question that Petrino has been successful coaching on the college level and as long as he continues to win his ethical issues will be swept under the rug. The offense gets an upgrade with Auburn transfer RB Michael Dyer coming on board, but it is yet to be seen how quickly new starting QB Will Gardner adapts.

The Orange finished better in 2013 than most thought possible considering they had to replace their most important player QB Ryan Nassib going into the 2013 season. Syracuse is tied with three other ACC squads for returning the most starters so this will be a veteran team coming in with higher expectations than they faced a season ago. QB Terrel Hunt showed flashes of good play as the season progressed and he will be back with 7 other starters on offense. If the Orange want to improve on their 2013 standing they have to get consistent production out of this offense which ranked 100th in scoring average last season.

After getting blanked in ACC play last season NC State has nowhere to go but up coming into the 2014 season. I actually believe the Wolfpack have the potential to be a surprise team in the ACC, but there are a lot of quality opponents they would have to overcome and first things first, this squad needs to win a conference game for their first time since 2012. The QB questions will now be settled with Florida transfer Jacoby Brissett coming eligible. Brissett will be a welcomed commodity as he is the perfect guy to run NC State’s spread offense. The offense should be markedly improved and that would in turn help the defense which returns 8 starters.

Boston College was a headache trying to figure out last season, but one would think this group will regress in 2014 with only 10 starters returning along with QB Chase Rettig and RB Andre Williams moving on. The offense has to replace more pieces than any coach would be comfortable replacing and the offensive unit is in near complete rebuild mode as a result. It will take some time for the new starters to jell and it is unrealistic to think this group would finish higher than the 71st scoring rank produced in 2013. The defense has to replace 5 starters, but there is confidence in DC Don Brown to coach this unit up to play at a more than respectable level.

Things appear to be going from bad to worse for Wake Forest as they return just 10 starters to a team that was already one of the least talented squads in the ACC. The Deacons finished 2013 on a 5 game losing streak and that didn’t inspire much to get excited about going into the winter. New head coach Dave Clawson is a good pickup out of Bowling Green, but it won’t be easy in his first season as he has to replace starting QB Tanner Price and top WR Michael Campanaro. Clawson built success at Bowling Green with defense and that is the unit that will have to carry the slack in 2014 for Wake Forest. Expect the defense to be the only redeeming feature of the Demon Deacons this season.

Good luck trying to predict the ACC Coastal as there are arguably 5-6 teams that have the potential to claim the divisional crown. North Carolina returns the most starters of any contender in the Coastal and that includes QB Marquise Williams who is primed for a breakout season. North Carolina is also loaded at the skill positions on offense, but the O-line and defense are areas of concern. The defense returns 7 starters, but the 4 guys who left where important pieces.

Al Golden has done a nice job of returning Miami to relevance in the ACC, but he has yet to make the final step forward in claiming a conference title during his tenure. Miami returns their most important offensive player with RB Duke Johnson who will make a legitimate case for being the best halfback in the country. Starting QB Stephen Morris will be replaced by Ryan Williams who could get off to a slow start after dealing with an injury during the offseason. Williams hopes to start game one against Louisville, but that isn’t a guarantee at this point. The Canes have gifted athletes on defense, but this unit has been a problem during Al Golden’s time in Miami. If the defense can work together as a cohesive unit there should be improvement on this side of the ball.

This might be too low a ranking for the returning Coastal champions, but the Blue Devils won’t be sneaking up on anyone in 2014 and they will have to work just that much harder to stay atop the division as they will be the hunted instead of the hunter. Duke should be even better on offense with both QBs Anthony Boone and Brandon Connette coming back, along with capable replacements at RB for Jela Duncan who has moved on. In 2013 the defense made up for their deficiencies by forcing a lot of turnovers, but that isn’t necessarily a recipe for long term success. Duke is likely to regress slightly on defense with teams making a point of ball security when they face the Blue Devils.

The Yellow Jackets seem to come into every season flying under the radar, but they give teams fits with their triple option offense and it most often leads to Georgia Tech ending the regular season at the top half of the Coastal standings. The Yellow Jackets ranked in the top 30 in both points for and points against in 2013 and that is an accomplishment in itself with the kind of schedule Georgia Tech went up against. QB Vlad Lee transferred, but there is potential in Justin Thomas under center. The loss of three O-linemen along with RBs David Sims and Robert Godhigh hurts, but there are numerous skill players that can fill the gaps and the O-linemen can be plugged in relatively easily to the triple option offense as long as they can cut block.

Things can certainly get worse at Virginia Tech before they get better after a disappointing 2013 season. Starting QB Logan Thomas departs from what was a dysfunctional Virginia Tech offense and it is hard to believe this unit will turn around for the better with a new QB under center and remaining question marks at RB and the O-line. The defense will have to carry the Hokies again in 2014 and that isn’t a recipe for success especially since the defense has to replace 6 starters.

The Pitt Panthers are some experts pick as a dark horse sleeper in the Coastal, but I’m not buying it until I see some results on the field. The offense has to replace QB Tom Savage, but there is hype around the future of Chad Voytik under center. The O-line has been an issue in years past for Pitt, but the hope is that with experience will come better play as 4 starters return. The defense also loses their best player with Aaron Donald who was drafted in the first round of the NFL draft.

Virginia is tied for the most returning starters in the ACC, but there is legitimate debate over what kind of significance that has since this was the worst team in the conference a season ago. I’ll go out on a limb and say the Cavaliers are the only team in the Coastal that have no chance at winning the title. At least Virginia has brought in solid recruiting classes consistently under Mike London, but that hasn’t made much of an impact on the field. The defense will have to carry the team as they return 9 starters and they have a solid front seven on paper. The most important key to a Virginia turnaround is finding a consistent option at the QB position.