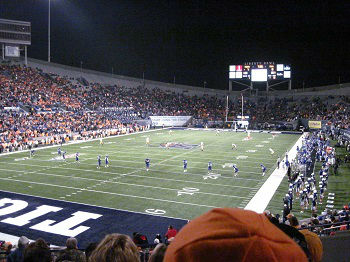 Preview: Memphis surprised a lot of people last season as they went 10-3 overall, earning a share of the AAC title, and winning their bowl game against BYU in 2OT by a final of 55-48. The Tigers’ only losses in 2014 came against the likes of UCLA and Ole Miss on the road, along with a conference loss against Houston. With 8 starters back on offense expect this unit to continue to put up solid numbers, but the defense is in rebuild mode with only 3 starters back in the mix.

Paxton Lynch has shown a lot of growth as the starting QB over the past two seasons and the coaching staff is expecting their guy to take another step forward in 2015, especially with so much returning talent on the offensive side of the ball. Lynch will work behind an experienced O-line that returns 4 starters. The RB position losses its top guys from 2014, but the team has capable guys ready to step up in Cooper and Dorceus. The receiving corps will also be a position of strength on offense with 4 of the top 6 guys from 2014 returning including all-conference performer at TE Alan Cross.

The defense has a lot of work to do in getting ready for 2015 after being one of the top units in the conference in 2014. DC Barry Odom left to coach at his alma mater and the defensive unit needs to find replacements for 8 starters that have moved on. The D-line will look to build around Jackson Dillon who’s been solid at the end position. Latarius Brady will also look to insert himself at the end position after playing in a backup role last season. LB is also a near complete rebuild as this unit needs to find three replacement starters. The secondary, just like the other spots on defense, needs new starters to step up and this unit will build around Nelson, Lanier, and Ball.

Prediction: After earning a share of the conference title in 2014 the Tigers are looking to repeat that kind of success in 2015. With the offense returning 8 starters along with QB Paxton Lynch this unit will look to only get better in the coming year. The defense is an area of concern given the amount of turnover, but the offense should help make up for a learning defensive unit. Memphis will test themselves in the nonconference against Bowling Green and Ole Miss, but games against Missouri State and Kansas should be wins. Anything short of finishing near the top of the conference will be a disappointment for this squad.