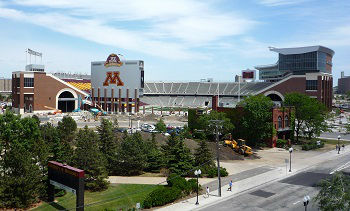 Preview: The Minnesota football program has been restored to respectability under head coach Jerry Kill. Last season the Golden Gophers excelled going 8-5 overall with key wins coming against Michigan and Nebraska on the road. Minnesota ended the season on a sour note however with a 17-33 loss coming in their bowl game against Missouri. Expect the Gophers to continue to play slow behind the strength of their defense as they grind out their wins again in 2015.

Minnesota was almost a nonfactor through the air last season and this offense needs to get more balanced if they’re going to improve this year. The Gophers bring back veteran QB Mitch Leidner who will look to improve his game through making quicker decisions in the pass game. Minnesota has the unenviable task of finding replacements for top skill players Cobb and Maxx who’ve headed on to the NFL. The RB position will try to fill the void left by Cobb with backs Williams and Smith. The receiving corps needs more playmakers and the coaching staff is hopeful of their young crop of players. The O-line returns 3 starters to a unit that should be steady in 2015.

Defense was the clear strength of the team last season and that should be the case again this year with 7 returning starters coming back. The defensive line will look to get more pressure on opposing QBs this season with ends Ekpe and Cockran looking to be a stable tandem on the outside. The LB position must replace Wilson, but the coaching staff is hopeful that guys like Williams and Poock will step up. The secondary is the strength of the defense with all 4 starters coming back. The secondary will be led by all-conference standouts Murray and Boddy-Calhoun.

Prediction: Minnesota can pretty much put down losses in their games against Ohio State and TCU who both figure to be in the playoff discussion all season. Outside of that every other game on the schedule is winnable for the Gophers. Minnesota nearly won the Big Ten West last season and if everything goes right for this squad in 2015 they could be playing Wisconsin for a chance at the divisional crown again this season. However, with the top offensive playmakers moving on I have my doubts that the offense can improve this season even with Liedner back.