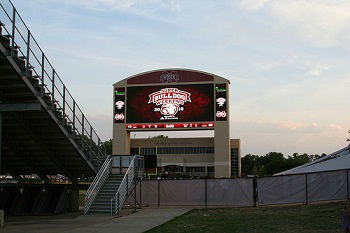 Preview: Mississippi State had one of the better seasons in program history last year as the Bulldogs went 10-3 overall with their best wins coming against the likes of LSU, Texas A&M, and Auburn, before losing in their bowl game to Georgia Tech by a final of 34-49. Mississippi State had a season to remember, but with only 9 starters back in the fold this squad is likely to take a step back in 2015. Dan Mullen has done a great job turning this program around as the team has gone 46-31 overall in his 6 years as the head man.

The main reason to believe the Bulldogs won’t fall off this season is because they return Hesiman hopeful senior QB Dak Prescott. The talented QB is a serious threat both through the air and on the ground, and more will be expected of him with only 4 other starters coming back on the offensive side of the ball. The Bulldogs will be a work in progress along the O-line with only 2 starters returning. The WR position isn’t a complete rebuild with a guy like Wilson back in the mix. Mississippi State needs to replace their top RB Josh Robinson, but there’s capable bodies ready to step up with guys like Shumpert, Lee, and Williams.

The defense will be rebuilding around 4 returning starters and it’ll be interesting to see how the new faces plug in to fill the gaps. The D-line has to replace 3 starters, but the middle of the line should remain solid with a guy like Chris Jones to build around. The end position will look upon Ryan Brown to step up. The LB group loses its top performer from 2014, but the unit still has talent with Green and Brown ready to make an impact. The secondary was the weakness of the defense in 2014 and with 3 starters needing to be replaced this unit will be a work in progress.

Prediction: With a significant amount of roster turnover its tough making a case for the Bulldogs to stay near the top of the elite SEC West. Expectations remain high for a team that returns a QB like Dak Prescott, but the Heisman hopeful doesn’t have as much talent around him this season. Mississippi State will likely rack up 4 wins out of conference, but this squad could actually finish last in the SEC West given every team in the division has top 25 ability and the bottom teams from last season return a lot more starters.