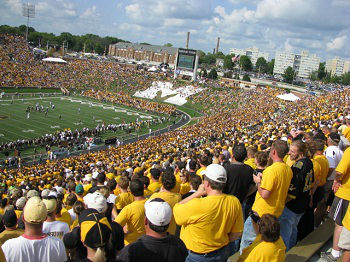 Preview: Missouri seems to be the surprise team in the SEC every season and the squad could come up and win the SEC East again in 2015. The Tigers have been stable under head coach Gary Pinkel who’s led the team to a 113-66 record over his 14 years as head man. Missouri is coming off of back to back SEC East crowns and this team has really been undersold coming into the last two campaigns. With 13 starters back this team has the pieces in place to make another run at the SEC title, but they won’t be favorites.

The offense wasn’t asked to do a whole lot last season as the team generally won behind the strength of their defense, but this unit will be looked upon to do more in 2015. The Tigers are glade to have QB Maty Mauk back as the former highly touted recruit looks to take the next step in his progress. The O-line showed improvement through the 2014 season and now a unit that returns 4 starters will be considered a strength coming into this year. The receiving corps losses its top 3 performers from 2014 and a lot of fresh new faces will be called upon to perform. With a lack of depth and experience at WR look for the team to work in the TEs more often. The run game losses Marcus Murphy, but the unit should be solid again in 2015 with Russell Hansbrough back and ready to have another 1,000+ yard season.

Missouri lost their DC to Missouri State, but the unit will remain well coached with the addition of Barry Odom who’s completely turned around Memphis on the defensive side of the ball in recent years. Missouri has been well known for the D-line and the unit should remain stout in the middle, but the end position is unproven. The end position will look to get a lot out of underclassmen like Brady and Harris. Even though the D-line might have some new faces in the mix, the LB crew brings back proven talent with Scherer and Brothers leading the unit. The secondary also isn’t short on returning experience with guys like Dennis, Penton, Odom, and Webb in the mix.

Prediction: Missouri is experienced at a number of position, but the team will look to bring along young players at both receiver and the end positions. These are two areas that were a significant strength of the Tigers in 2014. Missouri won’t be the favorites to win the conference again this season, but I also am not counting this squad out, especially with QB Maty Mauk still in the equation. Missouri also gets crossover games against Mississippi State and Arkansas which will be tough, but it could also be a lot tougher. Don’t rule out another SEC East title for this team just yet.