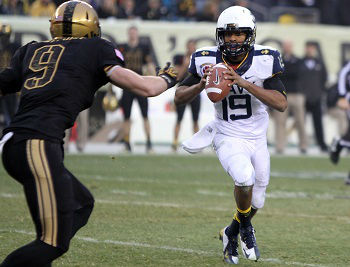 Preview: The Navy football program has seen a lot of success under head coach Ken Niumatalolo who’s led the team to a 57-35 record in his 7 years as the head man. Navy returns just 11 starters from a 2014 squad that had a lot of success going 8-5 overall, including a 17-16 bowl win coming against San Diego State. Navy finished the 2014 season strong going 6-1 in their last 7 games and that was something positive for this squad to build off of heading into the offseason. This season Navy has officially joined the AAC which is the first time their football team hasn’t been Independent in 134 years.

Navy returns senior QB Keenan Reynolds who already hold many school records and Reynolds is arguably the best player in the history of the program at the QB position. This will be Reynolds’ fourth season as the starter and in his time under center he’s racked up an impressive 21-11 record. Navy will look to rebuild their O-line with just 2 starters returning to the unit. The O-line will build around leader guard Binns. Having an experienced backfield is always important when running the triple-option and the Midshipmen return the likes of Swain and Sanders who provide a great 1-2 punch. The receiver spot is highlighted by Jamir Tillman.

Navy losses a lot of talent from an adequate defensive unit that had their moments of success in 2014. The unit returns just 6 starters and losses 4 of their top contributors. The D-line should be steady as this part of the defense builds around promising players Sarra and Anthony. Navy deploys a 3-4 scheme which puts a lot of the tackling responsibility on the linebackers. The Midshipmen return Gonzalez who racked up the tackles in 2014, but he’ll be surrounded by 3 new starters. The secondary returns the most experience with guys like Clements, Adams, and Bertrand to build around.

Prediction: This is a new era for Navy as they head into the AAC. The Midshipmen have a winning record against the teams currently in the conference and with a veteran QB manning the triple-option the team should be a factor in the league right away. The goals for this team will be winning the Commander-in-Chief’s Trophy along with making it back to a bowl game. A conference title is likely out of reach, but if Reynolds can stay healthy don’t count the Midshipmen out.