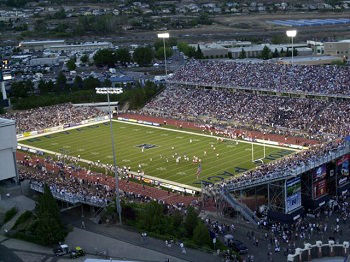 Preview: Nevada made it to postseason play in their second season under head coach Brain Polian as the team finished 7-6 overall with a bowl loss coming to Louisiana Lafayette by a final of 3-16. The Wolf Pack are now 11-14 in their 2 seasons under head coach Polian, but it’s going to be tough for this squad to repeat some of the success they had last year with question marks at the QB position. Nevada will look to perhaps lean on their defense more in 2015 as they try to get back to a bowl game.

Nevada has actually had quite a bit of stability at the QB position over the past decade and now it’s time for the team to find their new starter to build around. The QB position is in a three way battle with veteran Tyler Stewart trying to fend off up and coming dual threat QBs Hunter Fralick and Dante Mayes. Even with veteran Cody Fajardo under center the passing game still had their share of struggles last season. The WR corps will look to be more productive this season as they build around Hasaan Henderson who’s coming back from injury. The O-line has 2 returning starters to what has been an inconsistent unit. The RB position is the top returning part of the offense with Jackson and Butler back and ready to produce.

The defense was better than expected last season, but the unit was beaten up by some of the tougher teams the Wolf Pack faced. The defensive front hopes to carry this squad to more success with 4 starters back in the front 7. Starting with the D-line this unit looks to build around DE Lan Saeu who had a breakout 2014 and tackle Yates who’s one of the best interior lineman in the conference. The LB position is also deep with talent as this unit looks to get a lot of production out of guys like Dobrich, Lyons, Lane, and Faaituala. The Pack need the defensive front to be as good as advertised with youth and inexperience throughout the secondary.

Prediction: Unless the defense is better than expected, Nevada could take a step back in 2015 given the question marks they have at the QB position. If the Wolf Pack can somehow find the answer under center right away then this team could even compete for the weaker West division title in the MWC. The West division is up for grabs, but a brutal nonconference schedule could make it tough for the Pack to reach bowl eligibility.