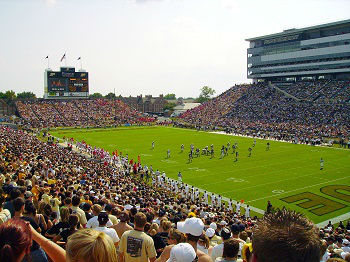 Preview: The Boilermakers were one of the weaker teams in the Big Ten last season going 3-9 overall and 1-7 in conference play. The highlights of the year for Purdue came in their opening win over a solid Western Michigan squad and a road win over Illinois. Purdue actually played in a number of close games throughout 2014 and the Boilermakers are hoping to turn some of those close losses into wins in 2015. Head coach Darrell Hazell actually made progress last season going from 1 win in 2013 to 3 in 2014. The team is hoping to make similar strides in this upcoming campaign.

The offense was trying to find the answer at QB in 2014 and the team is hoping they found it with former highly touted recruit Austin Appleby. The junior had his ups and downs last season, and Appleby didn’t exactly go into the offseason on a high note after having a brutal month of November. Appleby did lead the team in their one Big Ten win of 2014, but if he doesn’t continue to improve there are options like Sindelar and Blough waiting for their chance. The O-line should be a solid unit with all 5 starters returning including leader Robert Kugler. The RB position will look to freshman Markell Jones to produce after losing their top two guys from 2014. The WR position will be led by one of the top pass catchers in the Big Ten with Anthrop returning from injury.

Purdue had a play a lot of underclassmen in 2014 and as a result the unit took their lumps as they worked through some growing pains. With 7 starters back the team is hoping they continue to build around the foundation they starting to lay last year. The D-line ranked in the bottom half of the Big Ten last season and the unit will return just 2 starters. The LB position looks to back the line with 3 returning starters including Bentley who had a tremendous freshman campaign. The secondary should be adequate with 2 returning starters and this unit will build around all conference performer Frankie Williams.

Prediction: The fan base is getting restless especially considering the fact that the team hasn’t won a home conference game yet under head coach Hazell over two seasons. The defense should be better as the young group continues to gain experience and seasoning. The O-line also looks to be solid on offense as they hope to propel Appleby to a better campaign. Purdue is lacking for bigtime playmakers and that’ll hurt them going against some of the tougher teams on their schedule. A bowl game is the goal for this team, but likely out of reach especially with tricky nonconference games coming against Marshall, Va Tech, and Bowling Green.