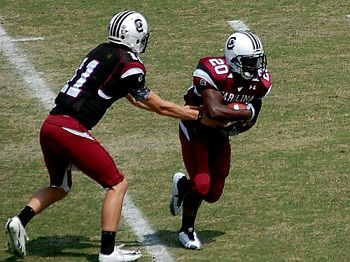 Preview: South Carolina wasn’t able to live up to their lofty expectations last season as the team went on to go 7-6 overall with a 24-21 bowl win coming against Miami. The Gamecocks were favored to win the SEC East, but after an opening 28-54 home loss against Texas A&M expectations were scaled back a bit. The Head Ball Coach has done a great job with this program turning in 84 wins during his 10 years as the head man. South Carolina took a step back last season and the weakness was the defense which was gashed a number of times on the way to a 3-5 conference record.

The offense put up solid numbers last season under veteran QB Dylan Thompson, but with Thompson moving on the team must find a replacement. The leading candidate to take over the starting role will be former highly touted recruit Connor Mitch. At his time in the program Mitch has shown improvement and the coaching staff is hopeful that he can take the next step and become a successful starter. The O-line returns the most experience on offense with 3 starters back in the mix. The unit must replace veteran A.J. Cann, but the unit will look to Bradndon Shell to take on a leadership role. RB will be in rebuild mode with the talented Mike Davis moving on to the NFL early. The position will be shared amongst guys like Wilds and Williams who’ll look to prove themselves. The main cog in the pass game will be lone returning starter Pharoh Cooper.

The defense took its lumps last season and the unit will look to improve this year under new DC Jon Hoke, who’s worked for Spurrier in the past. The defense at least returns 8 starters to build around so experience won’t be as much of a concern. Hoke has a lot of work ahead of him, but he’s up to the challenge to turn things around. The major switch will be the team going to the 4-3 scheme after testing out different formations in 2014. The real issue for the Gamecocks was getting pressure on opposing QBs. The D-line is hoping to get revitalized with a slew of new recruits coming in along with JUCO transfer Lewis. A number of players have had to make position changes in the back end of the defense, but there’s only room for improvement after the failures of 2014.

Prediction: South Carolina looked more engaged during spring ball this season after coming off the disappointing 7-6 campaign in 2014. This will be a rebuilding season for the Gamecocks as they work in a new starting QB along with the changes being made on the defensive side of the ball. Having a very difficult nonconference schedule could make things tricky for South Carolina to get back to a bowl game, but at least the Gamecocks play in the slightly more manageable East division of the SEC.