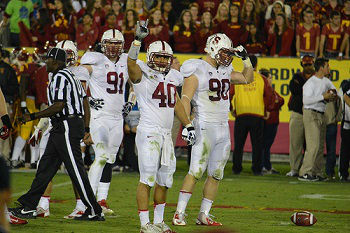 Preview: The Jim Harbaugh era seems like a distant memory now at Stanford, but the program was left in the capable hands of David Shaw who’s picked up an impressive 42-14 record during his 4 years as the Cardinal head man. It has to hurt a little for Stanford fans to see Harbaugh back in the college ranks, but this program hasn’t been taking on much water with Sahw at the helm. The Cardinal underperformed somewhat last season as Stanford went 8-5 overall with a 45-21 bowl win coming against Maryland. Stanford was just 5-5 before finish the year on a 3 game winning streak.

With 9 returning starters on offense the success of Stanford this season will hinge on the team improving on this side of the ball. Coach Shaw is hoping to get better progression out of veteran QB Kevin Hogan who didn’t take the step forward that many were expecting in 2014. The run game stalled out last season and that put more pressure on Hogan than he was capable of handling until the final three wins of the years. The O-line returns 4 starters to a unit that should remain strong despite the loss of Andrus Peat. The run game is hoping to bounce back in 2015 with more expected out of McCaffrey. Also look for Sanders and Wright to pitch in as backups. If the run game can open things up that would be great news to Devon Cajuste who’s the top returning receiver.

Even though Stanford has their issues on offense last season the defense remained dominant as they were head and shoulders above anyone else in the Pac 12. The level of dominance shown in 2014 isn’t likely this year with just 4 returning starters to a unit that’ll have to rebuild continuity. The D-line has question marks with experience and depth considering 0 starters return. The line backing corps looks to be the strength of the unit led by proven guys like Anderson, Martinez, and Kalambayi. The depth of the secondary is also a concern due to attrition. The unit is hoping to build around the likes of Lloyd and Whitfield who both switched position to play in the secondary.

Prediction: The Cardinal looked like one of the best teams in the country during the final three games of 2014, but the offense was too inconsistent for the team to seriously compete for the conference title. The offense should at the very least improve with so much returning experience, but there are legitimate question marks surrounding the defense that was hit hard by attrition. Many believe Stanford is still the biggest threat to dethrone Oregon in the Pac 12 North, but don’t be surprised to see some emerging teams jump Stanford in 2015.