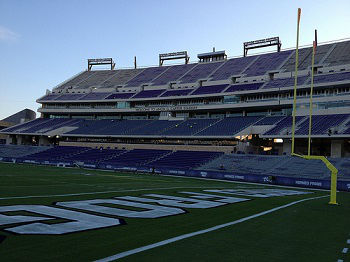 Preview: TCU was the major loser in the new college playoff format as the Horned Frogs deserved a shot at the title, but they weren't granted access to compete. TCU dominated throughout 2014 going 12-1 overall, including an impressive 42-3 win over Ole Miss in their bowl game. The Horned Frogs only loss came against Baylor on the road by 3 points and that isn’t a blemish as much as an impressive competitive road performance. Head coach Gary Patterson has done tremendous things at this program leading the Horned Frogs to a 132-45 record over his 14 seasons as the head man.

TCU should remain a force on the offensive side of the ball with 9 returning starters to a unit that was one of the best in college football in 2014. The strength starts with veteran dual threat QB Trevone Boykin who’ll be a legitimate Heisman contender right out of the gate. Boykin will work behind an O-line that returns 4 starters to a unit that should be stout in 2015. The RB position is also loaded with talent in both the experienced and promising categories. Look for the unit to be led by Green, Hicks, and Nixon. This dangerous offense is rounded out by a solid corps of receivers led by Doctson, Listenbee, and Gray.

Coach Patterson prides himself on great defense and he’ll have his work cut out for him shaping a group that returns just 5 starters. The D-line faces the least attrition with 3 returning starters along with Nebraska transfer Echols-Luper. The LB position takes on a lot of responsibility in the 4-2-5 scheme and this group needs to replace both of its starters. The line backing corps looks to get something out of young guys like Dunham and Freeze potentially along with the returning depth. The secondary was solid last season and the unit will look to build around 2 returning starters.

Prediction: This team is loaded with talent and there shouldn’t be much of a drop off, if any, from a team that lost only 1 game in 2014. There are question marks on a young defense that returns 5 starters, but the offense should be even better with practically everyone back and ready to put up record numbers. Boykin could very well be the Heisman leader after the first few weeks of the season, but he can’t let all the chatter get in the way of his mindset. TCU gets Baylor at home this time around and the team will be fighting with a chip on their shoulder all year given their snub in 2014 from the college playoff.