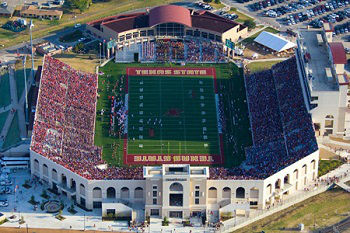 Preview: The Bobcats are still fairly new to the FBS and they don’t garner a lot of respect shown by not getting a bowl invite with 7 wins last season. Texas State will come into the season with a chip on their shoulder given they were slighted in bowl season. The Bobcats return 12 starters to a group that should be competitive through all of their schedule outside of a couple tough nonconference matchups. Head coach Dennis Franchione continues to lead this program in the right direction earning a 36-34 record through his first 6 years as the head man.

Last season the Bobcats switched to an up-tempo attack and the results were positive in many key statistical areas. With a year in the system now under their belt the offense should continue to grow with 7 returning starters back on this side of the ball. Texas State is set at the QB position as junior QB Tyler Jones is back and ready to continue his progression. Jones will work behind an O-line that returns 3 starters to an adequate unit. The backfield remains in good hands with Robert Lowe back in the mix to lead the way. The receiving corps has some question marks and the team is hoping to get more out of guys like Smith, Gaines, and Mercer.

Prediction: Texas State was the only 7 win team not to make a bowl game in 2014 and this squad should be back in the conversation again in 2015. The offense should only get better given their returning talent at the QB and RB positions. The defense will have a learning curve early on in the year, but if this unit can get some good reps working behind a solid offense then the Bobcats should continue to get better throughout the season. A bowl game should be the main goal of this team in 2015.