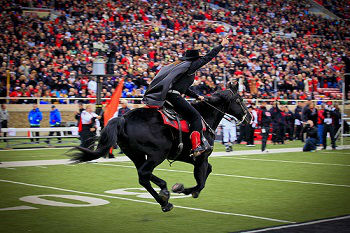 Preview: The Red Raiders took a big step back last season as the team played sloppy on both sides of the ball on their way to a 4-8 overall record. Texas Tech was young last season, but with 17 returning starters mixed with talented depth this team should start turning things around in 2015 if they can stay more disciplined. Kliff Kingsbury has had an up and down couple of years as the head man going 12-13 overall.

The offense was plagued by inconsistent QB play throughout 2014. QB Davis Webb earned the job early on while starting the first 8 games before getting injured. In came freshman QB Patrick Mahomes who played well enough down the stretch to be a candidate to take the starting job from Webb in 2015. The offense had issues with turnovers in 2014, but with 9 starters back this unit should have more continuity. One of the major strengths will be the offensive line which returns 4 veteran starters along with all-conference player Clark at LT. The RB position will also be solid with the return of DeAndre Washington. The WR corps was up and down in 2014 and this unit will look to guys like Grant, Lauderdale, and Sadler to produce on a more consistent basis.

The key to more success will be limiting turnovers on offense while forcing more on the defensive side of the ball. New DC David Gibbs is teaching the importance of forcing turnovers which he had great success doing at Houston. The D-line has promise with 3 returning starters, but the interior needs a lot more out of veterans Levi and McElrath. The LB corps is in a bit of a rebuild with only 1 returning starter back. The secondary will be looked to for veteran leadership as this unit returns 4 starters. The secondary will be led by guys like Gibbs, Bethel, and Ward.

Prediction: Things went in the wrong direction in year two under young head coach Kingsbury, but there’s reason to believe the Red Raiders can rebound in 2015. Texas Tech returns 17 starters to what is now one of the more experienced team in the conference. The offense will look for the long term answer at QB with Webb or Mahomes and once that settles itself out this unit should show positive growth throughout the year. Reaching a bowl game should be the floor for this squad in the coming season.