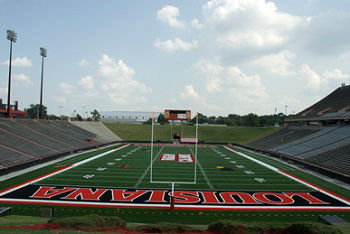 Preview: Last season the Cajuns tested themselves in the nonconference taking their lumps against some solid teams and that toughened this group up as they went on to finish the year on an 8-1 run which included a 16-3 bowl win against Nevada. The UL Lafayette program has been in great hands under head coach Mark Hudspeth who’s picked up a 36-16 record in his 4 years as the head man. It’ll be tough for Lafayette to continue their recent high level of success given a number of key guys need to be replaced with just 11 returning starters back in the mix.

The Cajuns weren’t blowing the doors off anyone last season on the offensive side of the ball, but the team was extremely efficient with their scoring opportunities. A number of offensive leaders need to be replaced, including QB Terrance Broadway who had a great career. The QB position will be an open battle between guys like Haack, Nixon, and Davis. Whoever wins the job will work behind an O-line that returns just 2 starters, but those returning players are great pieces to build around. The ground game will be leaned on with conference POY Elijah McGuire back for another year. The Cajuns also have talent at the receiver position and this group will build around Riles, Bates, and Robinson.

Lafayette was up and down on the defensive side of the ball in 2014, but there’s no denying how impressive this unit looked in their bowl game giving up just 3 points to Nevada. There will be some rebuilding to do as just 5 starters return to the defense. The Cajuns have some new blood coming in with coordinators Harbison and Smith coming over from Auburn. This unit was far from a lock down force, but the defense was effective ranking tops in the conference in red-zone efficiency. The defensive front 7 returns just 3 starters and the line backing corps will be looked at to lead the defense. The LB corps will build around talents like Peters, Lightfoot, and Tovell. The secondary also needs some rebuilding and this group will look to McCollum and Worthy for some leadership.

Prediction: The Cajuns will test themselves again in the offseason with tricky contests coming against Kentucky, Akron, and Louisiana Tech. Lafayette has a lot of key pieces to replace and there has to be some regression just based on the fact that this team was the most efficient squad in the conference in the red zone on both sides of the ball. This could be the year the Cajuns take a step back in the Sun Belt given a number of other teams that have the talent to dethrone Lafayette. Reaching a bowl game should be the ultimate goal of this squad.