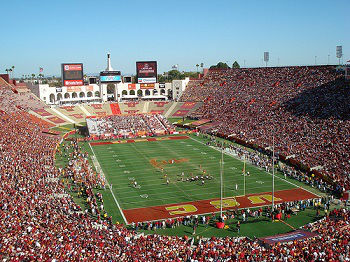 Preview: In a transition season under head coach Steve Sarkisian USC played respectably going 9-4 overall including back to back wins to end the year against Notre Dame and Nerbaska. Expectations will be higher this season as the Trojans bring back 14 starters including a number of key contributors, especially on the offensive side of the ball. Sarkisian used last season to instill his system and now his group looks ready to next the next step in their transition back towards the top of college football.

Expect this offense to be even better after what was a better than expected 2014 campaign. Somehow Kessler found a way to quietly have a terrific season in Southern Cal throwing for 39 TDs to just 5 INTs, while completing nearly 70% of his passes. In his second season in Sark’s system expect Kessler to continue his upward trajectory. Kessler will work behind one of the best O-lines in the conference as the unit returns all 5 starters. The ground game will miss Buck Allen who was the heart of the team last season, but the unit should still produce with Davis and Madden taking the bulk of the carries. The receiving corps is one of the best in the nation and this group will feature stars like Nelson Agholor, JuJu Smith, and Adoree’ Jackson among others.

The defense was very hot and cold throughout 2014 and it should be interesting to see if this group can take a step forward after losing top talent like Leonard Williams and Hayes Pullard. The defense still returns 7 starters and the cupboards certainly aren’t bare. The defensive line returns 2 starters and this adequate group will be anchored by the big Antwaun Woods. The LB corps also returns 2 starters and this unit will look to get production out of guys like Cravens, Dawson, and Sarao. The secondary is expected to improve with 3 returning starters back in the mix and this group will shape itself around the talented two way player Adoree’ Jackson.

Prediction: Even with showing some improvement and appearing to be headed in the right direction last season going 9-4 overall still didn’t get the fan base all too excited. Expectations are always set sky high at USC and this group had the talent and experience to seriously compete for the conference title. The defense still needs to work things out, but this offense has the potential to be one of the best units in the nation. Even with facing a tough schedule double digit wins and an outside shot at the playoff are on the table for this squad.