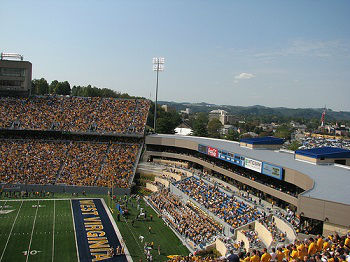 Preview: West Virginia was better than most were projecting in 2014, but going against a brutally tough schedule the Mountaineers still managed just a 7-6 record. West Virginia was very competitive in losses against teams like Alabama, Oklahoma, TCU, K-State, and Texas A&M, with their best win coming against Baylor by 14 points. With 14 returning starters this team expects to be a factor in the Big 12 yet again. Head coach Dana Holgorsen is getting his team acclimated to the Big 12 conference and in his 4 years as the head man Holgorsen has picked up a 28-23 record.

After having a tough 2013 the offense bounced back last season and hopes to continue to build on their success even with a new face under center. West Virginia ranked near the top of the conference in passing and total yards in 2014, but the team has a number key pieces that have moved on. The new starting QB will likely be JUCO transfer Skyler Howard who showed promise in his times backing up Trickett last year. The O-line will return 3 starters to a unit that will be looking for new leaders to step up and fill in the gaps. The run game is expected to improve if Rushel Shell can stay on the field. Shell is a former highly touted recruit and he put up solid numbers in 2014 when he was healthy. The WR corps lost some key players and this unit will look to work in some new faces.

Playing in a conference known for scoring, West Virginia actually played pretty well on the defensive side of the ball in 2014. This unit returns 8 starters and should be one of the better groups in the conference given their returning experience. The D-line returns just 2 starters and this unit is hoping to get more pressure in the backfield. The LB corps looks to be a strength with 2 returning starters back in the fold. The LB position will be led by veteran Kwiatkoski who led the defense in tackles last season. The secondary will also be strong with all 4 starters returning to a unit that’ll be tough to move the ball on consistently in 2015.

Prediction: The Mountaineers were in the middle of the pack in the Big 12 last season and that’ll likely be the case again this year given the immense talent at the top of the conference. The Mountaineers will get a good test right out of the gate with a home game against tricky Georgia Southern and their triple option attack. Holgorsen is known for his offense and this unit should continue to pump out the numbers in 2015. If the hype around the defense comes to fruition then this is likely to be another solid bowl seasons for the Mountaineers.