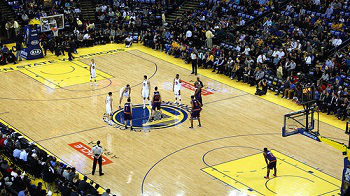 The New York Knicks, coming off a tough two point loss to the Phoenix Suns, go on the road to take on the Golden State Warriors who are coming off back to back competitive losses to teams they should have had no problems with.

The Warriors come into this game riding rather high recently as while they have had games stay competitive they always find ways to end up in the win column. The Warriors defense has been pretty weak this season and they really need to find a way to get back to the shutdown defense they are capable of playing and using to dominate opponents on both ends of the court.

The New York Knicks are going to be missing out on the presence of Derrick Rose in this game as he continues to deal with back spasms. Brandon Jennings is going to be getting the large bulk of the PG minutes and while he is a capable guard he is definitely lacking on the defensive end. The Knicks have been taking advantage of weak competition lately and are about to be going up against the best team in the league.

Take the Warriors to get the win and cover in this one as they are going to end this game early and take advantage of this opportunity to get the starters lots of fourth quarter rest.