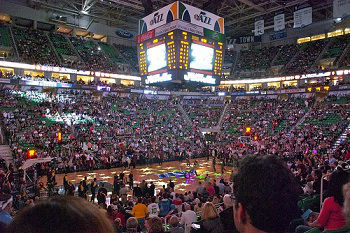 The Utah Jazz, coming off a one point loss to the Miami Heat, play host to the Denver Nuggets who are coming off a blowout loss to what should have been a very tired Houston Rockets team.

The Nuggets are a little banged up right now and really having a hard time recently as they have dropped four of their last five overall including a blowout loss last night against a Houston team that should have been exhausted from playing in Oakland the night before. The Nuggets are without Nikola Jokic for this game and have several players that are battling through injury issues. Denver is a terrible defensive team that is elite on the glass and has subpar ball movement which is really the only thing holding them back from being an elite offense.

The Utah Jazz are dealing with some injuries of their own and are going to be without the services of George Hill tonight as he continues to miss time with a toe injury. Gordon Hayward has been playing great recently and should be feeling good coming into this game against a very weak defensive team that likes to run the floor. Rodney Hood is a game time decision as he deals with a hamstring injury and if he is able to go it could really be a big plus for the Jazz.

Take Utah to get the win and cover at home as they are the better team even if Hood sits and should be in for a good game against a Nuggets squad that is floundering pretty aggressively.