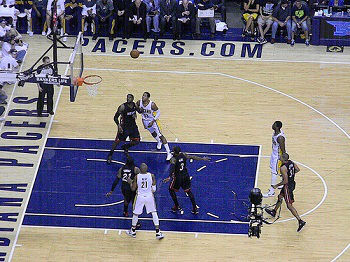 The Brooklyn Nets, coming off a tough loss to the Utah Jazz, go on the road to take on the Indiana Pacers who are coming off a close win in Detroit over the Pistons.

The Pacers are sitting at 18-18 right now and have to be hoping that they can build themselves up over that .500 win percentage as things have been heading in a positive direction. Paul George has been playing some solid ball and the Indiana offense is producing well right now as they are producing 104.9 points per game. Defense is where the Pacers need to really improve as they are allowing an abysmal 106.1, a number that is going to make winning on a daily basis pretty rough.

The Brooklyn Nets come into this game definitely floundering a bit but they have been keeping games close on a nightly basis and someday when Jeremy Lin comes back from his hamstring issue this team could actually be annoying to face. The Nets are the worst defensive team in the league so they definitely need to improve on that side of the ball but other than that their issues are not super glaring.

Take the Nets and the points in this one as I see the Pacers having a difficult time winning this game by double digits against a Brooklyn team that can definitely keep things competitive.