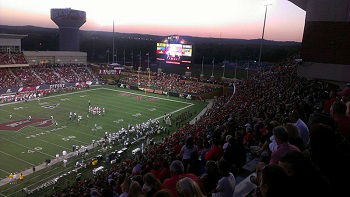 Memphis didn’t really fall off this season as they got strong results out of their new starting QB Riley Ferguson who’s thrown for 3,326 yards and 28 TDs on the year. Memphis had a great year last season with Paxton Lynch leading the squad, but the Tigers remained solid this year standing 8-4 overall and 5-3 in the undervalued AAC. Memphis closed out the regular season picking up back to back wins against Cincinnati and then Houston heading into December. Memphis put up some strong offensive numbers ranking 20th in the nation in passing and 17th in scoring average, while the defense was respectable giving up 27 points per game on average.

Western Kentucky is another squad that didn’t fall off as a program even with bringing in a new starting QB this season as the Hilltoppers went on to win CUSA standing 10-3 overall. Western Kentucky has gone on a tremendous run throughout conference winning 7 straight including the CUSA title game against Louisiana Tech by a final of 58-44. The Hilltoppers continue to be one of the best passing teams around ranking 5th in the nation in passing and 5th in scoring average. Transfer QB Mike White brought just what the doctor order as he’s thrown for 4,027 yards and 34 TDs.

This should be a really fun matchup to watch if you like offense, especially through the air. This will be a good measuring stick game for CUSA as they peg their best team against one of the upper tier teams from the AAC. We like Memphis to push the Toppers and we’ll take the points in what we view as a fairly even matchup.