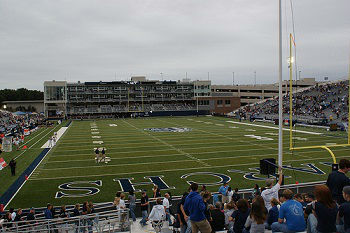 The Bahamas Bowl might be one of the least entertaining bowl game this postseason, but don’t tell that to Eastern Michigan fans who’ve been hungry for their team to make a bowl game. Eastern Michigan is having one of their best year’s in program history standing 7-5 overall and 4-4 coming out of the much tougher MAC West. In their regular season finale Eastern Michigan got past in-state foe Central Michigan by a final of 26-21 and the Eagles have won 2 of their past 3 heading into December. QB Brogan Roback was able to snatch up the starting gig and he’s thrown for 2,394 yards and 16 TDs to 6 INTs. EMU has leaned on their pass game which ranks 17th in the nation.

Old Dominion didn’t get much attention this season after their 1-2 start to the year, but the Monarchs went on a tremendous streak winning 8 of their last 9 games heading into the postseason. ODU has won 5 straight since their last loss which came on the road against conference champs Western Kentucky. The Monarchs don’t do any one thing at an elite level, but this balanced offensive attack has continued to grow as they now rank 27th in the nation in scoring average. Senior QB David Washington has had himself a strong campaign passing for 2,648 yards and 28 TDs to 4 INTs.

Old Dominion has been taking care of the ball this season and that’s been one of the reasons why this group found such consistent success in CUSA. Eastern Michigan is happy to reach a bowl game, but they’ll get a tough test here from the Monarchs who’ve been a much more consistent threat over the past couple of months. Side with ODU to come through as they win and cover the spread.