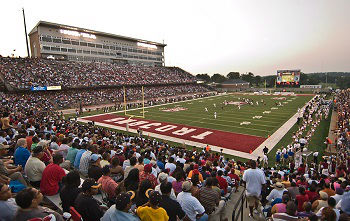 The Ohio Bobcats gave Western Michigan a run in the MAC title game losing to the Broncos by a final of 23-29. This was an impressive result for Ohio giving WMU a challenge which few have been able to do this season. Ohio came out of the much weaker MAC East division and this group stands 8-5 overall and they went 6-2 in conference. The Bobcats have lost 2 of their last 3 and they’ll get tested here by the one of best teams in the Sun Belt. Ohio was very inconsistent on the offensive side of the ball as this squad ranks 82nd in the nation in scoring compared to 26th in total defense.

The Troy Trojans have put up a lot of strong results this year in what was a great bounce back season for the program as Troy heads into bowl season standing 9-3 overall and 6-2 in the Sun Belt. Troy fell off a little bit towards the end of the regular season losing 2 of their last 3 against Arkansas State and Georgia Southern. Troy is well known for their early season challenge against Clemson on the road losing to the Tigers by a final of 24-30. The Trojans bring a balanced offensive attack and this group ranks 37th in the nation in scoring average and 22nd in total defense. Veteran QB Brandon Silvers has thrown for 2,945 yards and 22 TDs.

This should be an interesting matchup between the MAC and Sun Belt conferences. Troy will get somewhat of a home field advantage with this game being played in the state of Alabama. Troy brings a lot higher ceiling on the offensive side of the ball and we like that for to be the difference maker for the Trojans as they go on to win and cover the spread.