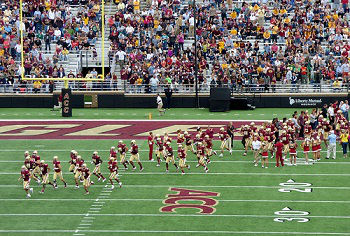 Maryland was downright awful at times during conference play, but fortunately for the Terps they were able to capitalize on their nonconference matchups as Maryland finished the regular season standing 6-6 overall and 3-6 in conference. In their regular season finale the Terps came through at home against Big Ten doormat Rutgers as Maryland went on to pick up the win by a final of 31-13. Maryland’s conference wins this season came against Purdue, Michigan State, and Rutgers who all finished in the basement of the Big Ten combining for 2 conference wins. Maryland has been weak through the air this season as this group ranks 110th in the nation in passing, 40th in rushing, and 94th in scoring.

Boston College was able to go on a run to reach six wins as the Eagles won their last two outings of the regular season against UConn and Wake Forest. Boston College took a big step back on the defensive end this season under their new defensive coordinator, but the team still built off of their defense as this group ranks 44th in the nation in points allowed compared to 119th in scoring average. Boston College took advantage of a weak nonconference slate as the Eagles stand 6-6 overall after going just 2-6 in the ACC. Kentucky transfer QB Patrick Towles didn’t add much firepower as he’s thrown for 1,579 yards and 10 TDs to 6 INTs this season.

This is one of the few matchups where Maryland actually brings in the advantage on the offensive side of the ball, but that’s not saying much against BC. Expect this to be a lower scoring game and with points coming at a premium we’ll side with Boston College and the points as the better bet in what should be a competitive matchup.