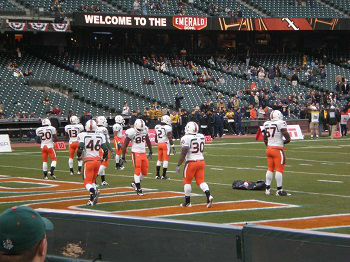 The West Virginia Mountaineers had just the kind of year they were expecting going 10-2 overall and 7-2 in the Big 12 and as a result West Virginia gave head coach Holgorsen an extension through the 2021 season. West Virginia quietly found a lot of success this year picking up some of their better wins against teams like BYU, Kansas State, TCU, Texas, and Baylor among others. The Mountaineers put up strong numbers across the board ranking 30th in the nation in passing, 18th in rushing, 45th in scoring, and 36th in total defense. This was an all around strong group that found different ways to win throughout the regular season. QB Skyler Howard put up some respectable numbers passing for 3,194 yards and 26 TDs to 10 INTs.

The Miami Hurricanes had a decent showing in their first year under head coach Mark Richt standing 8-4 overall and riding a 4 game winning streak heading into postseason play. Miami was streaky this season having two 4 game winning streaks sandwiched around a 4 game losing streak back in October. Miami started getting back on track towards the end of the regular season when they throttled Pitt at home beating the Panthers by a final of 51-28. In their regular season finale Miami got past a pesky Duke squad at home by a final of 40-21. The Canes also ranked well on both sides of the ball standing 34th in the nation in scoring average and 13th in total defense. QB Brad Kaaya continued to progress passing for 3,250 yards and 23 TDs to 7 INTs.

West Virginia picked up double digit wins which helped secure their head coach’s job and that should be a positive heading into bowl season. We like the direction Miami is heading under head coach Richt and this group will also look to head into the offseason on a high note. Miami gets the home state advantage in this bowl game and in a contest that should be competitive we’ll cautiously side with Miami to come through as they win and cover.