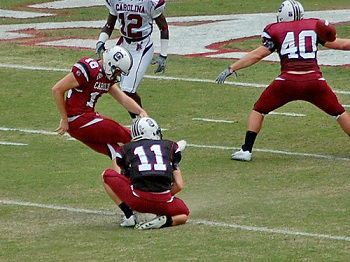 South Florida was able to build off the success and momentum they picked up during the second half of last season and this group was a lot of fun to watch this year as the Bulls stand an impressive 10-2 overall heading into bowl season. Not the ideal bowl matchup for a 10 win team, but that’s simply the unfortunate situation for many of the top tier AAC teams. South Florida went 7-1 in conference, but lost the tiebreaker to Temple who went on to win the conference title game. The Bulls are riding a 4 game winning streak with strong recent wins coming against Navy, Memphis, and in their regular season finale against rival UCF by a final of 48-31. QB Quinton Flower has been deadly both through the air and on the ground passing for 2,551 yards and 22 TDs, while also rushing for 1,425 yards and 15 TDs.

South Carolina was able to find some success in their first year under head coach Will Muschamp standing 6-6 overall coming into a tough bowl matchup here against one of the more undervalued teams in college football this season. South Carolina was terrible on the offensive side of the ball this season needing to lean on their defense to hang around in games. South Carolina ranks 117th in the nation in offensive yardage compared to 62nd in total defense. In their regular season finale the Gamecocks were embarrassed on the road against in-state foe Clemson losing to the Tigers by a final of 7-56. Even though South Carolina has some bad defeats, this group was also very competitive in a number of contests that they might have won if their offense was even an average threat.

South Carolina was unable to settle on a clear cut starting QB throughout the entire regular season and that’s one of the main reasons why this was one of the worst offensive teams in the nation. South Florida could be upset with this caliber of bowl matchup, but we like for this group to come in ready to prove themselves as they go on to win and cover the spread.