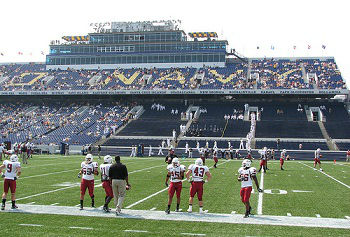 The Temple Owls got off to a slow start this season, but this group has come on strong over the past couple of months to win the East division in the AAC Standing 9-3 overall and 7-1 in conference. Fortunately for the Owls they were able to grab the tiebreaking win against South Florida early in league play to get over the 7-1 Bulls atop the division. Temple closed things out in their last outing getting past East Carolina at home by a final of 37-10. Over the past month, spanning 4 games, Temple’s defense has given up just 23 total points, including 2 shutouts. Against the Pirates QB Phillip Walker completed 12/20 passes for 158 yards, while the ground game added 156 yards and 5 TDs on 46 carries.

The Navy Midshipmen will play in their conference title game this week, then get their rivalry matchup against Army the following week. Navy has been working their way through a very impressive campaign, especially considering the Midshipmen lost their starting QB very early on in the year. Navy has been strong throughout standing 9-2 overall and 7-1 in conference which put them alone atop the West division in the AAC. Navy completely throttled SMU last week getting past the Mustangs on the road by a final of 75-31. The triple option attack has been running smooth all season as Navy ranks 2nd in the nation in rushing and 11th in scoring average. Against the Mustangs the ground game dominated picking up 496 yards and 9 TDs on 48 carries.

This championship matchup might get a bit overshadowed given some of the other important games going on today, but this should be a really great matchup between two teams that're having themselves great seasons. Navy put up an incredible performance in their last outing against SMU and we like for that momentum to carry over into this contest as the Navy triple option gets rolling on their way to the win and cover.