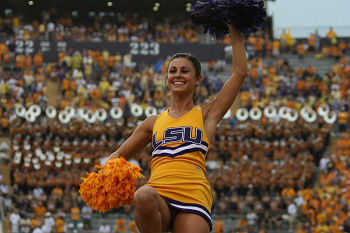 The LSU Tigers had a better season than their overall record might suggest as the Tigers stand 7-4 overall and 5-3 in the SEC with all of their losses coming in competitive close games against teams like Wisconsin, Auburn, Alabama, and Florida. In their regular season finale LSU cranked things up a notch on the offensive side of the ball as the Tigers went on to beat Texas A&M on the road by a final of 54-39. LSU has largely depended on their defense for success this season ranking 14th in the nation in total defense compared to 60th in offensive production. Transfer QB Danny Etling was a game manager throwing for 1,906 yards and 9 TDs to 4 INTs. The ground attack was led by Derrius Guice who’s picked up 1,249 yards and 14 TDs on 157 carries this year.

The Louisville Cardinals had the offensive output to be a team that could have made the college playoff, but the defense came up short in key defeats against Clemson, Houston, and Kentucky. In their regular season finale Louisville fell for the second time in as many weeks losing to rival Kentucky at home by a final of 38-41 in a result some felt could have costed Lamar Jackson the Heisman. Louisville actually ranks well on both sides of the ball standing 2nd in the nation in offensive production and 12th in total defense, but the defense was slipping down the stretch run. Lamar Jackson put up video game tpe numbers this season throwing for 3,390 yards and 30 TDs to 9 INTs, while also rushing for 1,538 yards and 21 TDs.

A lot of times there’s a Heisman hangover and teams that have the winner tend to not play up to expectations in their bowl game. LSU is better than their overall record might suggest, but not having one of their top players with Fournette being out could hold this group back slightly. Even though we’ve been high on this Louisville squad for most of the season, we feel the defensive strength for LSU could play a big factor in this matchup and as a result we’re taking the Tigers to cover the spread.