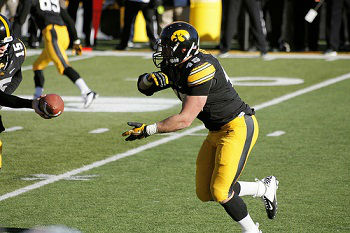 We weren’t all that high on this Florida squad throughout the regular season and a lot of their success was the result of playing in the easier SEC East division. Florida does deserve credit for their defense, but this is one of the worst offenses I’ve seen from an SEC division champ. On the year Florida ranks an impressive 6th in the nation in total defense compared to a miserable 116th in offensive production. The Gators closed things out on the wrong foot falling in back to back blowout losses against the likes of Florida State and then Alabama in the SEC title game by a final of 16-54. Florida couldn’t find the right option under center with both Appleby and Del Rio having their shortcomings. The offense has been the Achilles heel holding the Gators back from greatness this season.

The Iowa Hawkeyes didn’t live up to their high expectations coming into the year after winning the Big Ten West the year prior, but the Hawkeyes started to gain some steam down the stretch now standing 8-4 overall heading into bowl action. Iowa cranked things up a few notches over the final few weeks of the regular season, first getting past Michigan, then completely blowing out Illinois and Nebraska. Iowa has built some positive momentum and throughout the year the Hawkeyes played off of their defense as the Hawkeyes rank 26th in the nation in total defense compared to 120th in offensive production. There’s no excusing the offensive issues Iowa has had this year, but this group at least has a respectable option under center with C.J. Beathard who’s thrown for 1,874 yards and 17 TDs to 7 INTs. Iowa favors the ground game which has been led by Daniels and Wadley who’ve each rushed for around 1,000 yards this season.

Expect this to be a lower scoring game with points coming at a premium for each squad. Iowa really gained a lot of confidence and momentum down the stretch run of the regular season, while the Gators faded into the abyss. We’re really not all that high on either of these teams given their respective offensive issues, but in what should be a close and low scoring affair, we’ll take the Hawkeyes with the points as the better bet.