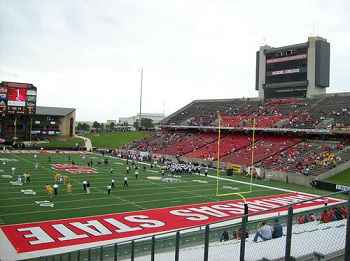 Preview: Arkansas State had another respectable season in 2014 under their new regime as they finished the year 7-6 overall after losing in the GoDaddy Bowl to Toledo by a final of 44-63. Arkansas State has become well known for their prowess on the offensive side of the ball and the Red Wolves are poised to put together another huge season offensively with 9 returning starters on this side of the ball.

Arkansas State runs a fast paced offensively system and they’ll have senior QB Fredi Knighten back for one more go around. Arkansas State will figure things out at RB with White coming back after serving as the backup last season and Knighten can also get yardage on the ground. The strength comes at receiver where this unit returns their top 6 guys. The O-line has been working on improving their short yardage situations which was an issue last season.

The Red Wolves showed their deficiencies in stopping the run last season, but this unit is hoping to be better with a number of transfers coming in and ready to perform. On the ends Arkansas State has two solid options with Stone and Rolland-Jones coming back. The Red Wolves lose All Conference performer Lee at LB, but Woodson, who was the second leading tackler, is looking to take on a larger role. The secondary took some losses, but the Red Wolves have guys returning from injury along with some transfers that look to contribute. Hayes leads the secondary at CB and he’s one on of the best CBs in the conference.

Prediction: The Sun Belt will be competitive again this season at the top and Arkansas State will have a chance at the title behind the strength of their offense. Arkansas State finally has some stability at head coach after going through 4 changes in 4 seasons. The defense is still full of question marks, but if this unit improves the team should finish right near the top of the Sun Belt.