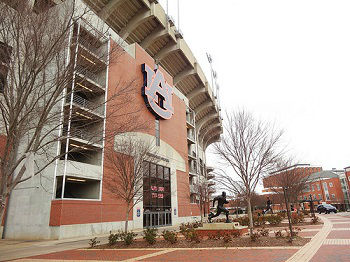 Preview: Auburn took a step back last season going 8-5 overall following 2013 where they won the SEC and went to the National Title game. Auburn looked like one of the top squads in the nation through their first 8 games of 2014 as they sat 7-1 overall before losing to unranked Texas A&M at home. This started Auburn’s downfall as they went just 1-4 down the stretch including a bowl loss coming against Wisconsin to end the year.

The Tigers have a lot to replace on the offensive side of the ball, but there is a lot of reason to be optimistic with backups ready to play a larger role mixed with new additions ready to make an instant impact. QB Jeremy Johnson is taking over for Nick Marshall and expect the offense to be more balanced as a result. Marshall was effective in his role as a zone-read run first QB, but the team probably has a higher ceiling with Johnson under center. Along the O-line Auburn losses 3 starters, but has 6 guys back that have made a start in conference. RB is also a position of strength with highly touted Roc Thomas and top JUCO transfer Jovon Robinson looking to be a lethal 1-2 punch.

Auburn adds former Florida head coach Will Muschamp on the defensive side of the ball as their DC. The Tigers had a tough time producing a pass rush in conference play in 2014, but this unit is hoping that Carl Lawson will be a difference maker coming back from injury. The Tigers also have 4 DT who’ve moved on and Auburn is hoping Adams can be the rock to hold down the middle of the defense. Auburn returns their top three tacklers from the backend of the defense along with Jonathan Jones who was second team All-SEC and the unit adds safety Tray Matthews who was once a standout at Georgia.

Prediction: Auburn has all the pieces in place to make another run at Alabama in the SEC West to challenge for a spot in the College Playoff. The Tigers have a manageable nonconference slate with their toughest test coming against Louisville in week one. Auburn will have crossover games with Kentucky and Georgia and these will be contests where the Tigers are favored. Anything outside of a berth in the College Playoff will be a disappointment for Auburn.