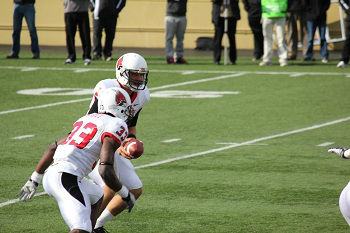 Preview: Ball State played their best ball of 2014 in the second half as they closed the year winning 4 out of their last 6 games. It was the start of the season that hurt the Cardinals as Ball State was 1-5 overall going into mid-October and that included a loss at home to an FCS opponent. With 18 returning starters the Cardinals will look to try and get back to bowl eligibility this season.

Ball State has to somehow find a replacement for RB Jahwan Edwards who racked up over 4,500 yards on the ground and 51 TDs during his career. Even though the Cardinals lose their top offensive threat at least they return the rest of last season’s starting unit. Ball State will run in three guys at RB this season and they’re expected to succeed by a veteran O-line. Ball State is in a better position at QB with both Milas and Mann coming back. WR is a strength of the team with All-MAC players Williams and Mabon being joined by Lacanaria and Hogue.

Ball State was ineffective last season in all phases of defensive play and it wasn’t just because of injuries to key guys. The Cardinals return nearly everyone from their front 7, but more has to be expected out of this group that produced just 16 sacks last season. LB is also a position that has the ability to be better with Ingle and Ryan expected to give more. Hurley and Cromartie headline a secondary that has a lot to prove on a defense that is still likely to hold Ball State back from competing for the conference title.

Prediction: Ball State has the pieces to be successful on the offensive side of the ball in MAC play, but there’s still a debate as to where Milas or Mann should start at QB. The defense still has a lot to prove and it would be a surprise if this unit ranked in the top half of the league. With Ball State returning 18 starters getting to bowl eligibility has to be the goal of this team.