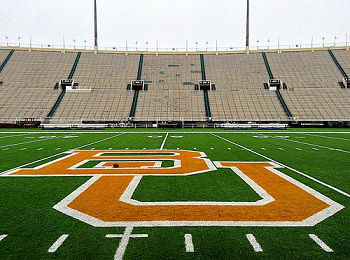 Preview: Baylor was snubbed from the first college playoff after going 11-1 overall and 8-1 in the Big 12 with their resume wins coming over TCU and Kansas State. The Bears have been turned into a consistent Big 12 title contender under Briles and they’ll be right atop the league again this season. The Baylor program has transformed over the past decade and with 17 returning starters this team is playoff or bust in 2015.

The Bears need to replace yet another great QB with Bryce Petty moving on to the NFL, but with their system and the way they recruit Baylor continues to find the next guy. This season it’ll be junior Seth Russell who’s been with the program for 4 years and he has the arm and athleticism to take this team to the promise land. The O-line will be strong again with all starters back including LT Spencer Drango who’s going to be in the NFL someday soon. Baylor also returns tons of talent in the rest of the offense with RB Shock Linwood back along with WRs Coleman and Cannon who each caught over 1,000+ yards last season.

The defense also remains in great shape for Baylor going into 2015. The Bears are strong along the line with Oakman, Billings, and Blackshear leading the unit. The line backers should also be set with guys like Campbell, Young, and Blanchard ready to hold the fort. The weakness of the Baylor defense has been the secondary, but there will be continuity this season with all four starters back and ready to prove themselves.

Prediction: Baylor comes into the season with a massive chip on their shoulder after getting snubbed from the playoff last season. Baylor has a very manageable schedule through the first 5 weeks and not playing anyone in the nonconference could turn out to bite this team again if they’re on the playoff bubble. The Bears might need to run the table to get in and their biggest tests come towards the end of the year with games against Oklahoma, Oklahoma State, TCU, and Texas to close out the regular season.