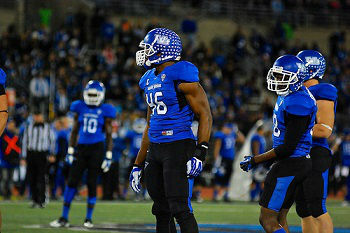 Preview: The Buffalo Bulls are coming off a disappointing 2014 season that saw Buffalo fall short of a bowl game with a 5-6 record overall. Buffalo had the pieces to be a relevant team in the MAC, but they spun their tires through most of the season opening 1-6 overall against their first 7 FBS opponents in 2014. Buffalo welcomes in Lance Leipold as their new head coach and the former D-111 coach has some pieces to build around right away.

The offense is in a good place with quality returning players at both the QB and RB positions. Buffalo has to feel good about having Licata under center given he already has the school record for most TDs thrown in a career. RB is also set with Anthone Taylor who surprisingly put up over 1,400 yards a season ago. Buffalo was one of the top offensive teams in the MAC last season and they’ll be strong once again as they also return experience at the WR and TE positions. The question remains on the O-line where three guys moved on and the Bulls have had to mix and match to find the right combination.

With a new coaching staff in place the Bulls will shift to the 4-3 scheme after having varying success and failures with the 3-3-5. There are questions both on the D-line and at LB, with a number of guys needing to be replaced, but the team does return quality players like D-linemen Crawford and Perisse, along with LB Alozie. The CB position is set with Baker and Ross, while the Bulls will need to find replacements at both safety positions including the loss of All-MAC performer Redden.

Prediction: Leipold found consistent success at the D-111 level going 109-6 in eight season at Wisconsin-Whitewater and it’ll be interesting to see if his coaching styles transitions well to the FBS. The defense needs some time to transition to a new scheme, but the offense should be right near the top of the MAC again in 2015. Going against a pretty tough schedule a bowl game has to be considered a victory for the Bulls in their first season under a new regime.