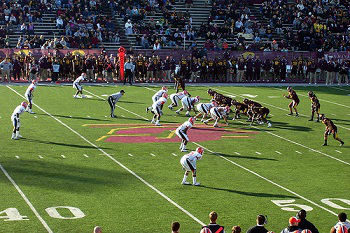 Preview: Central Michigan had one of the more veteran rosters in the nation last season and the Chips turned that into a 7-6 campaign with a loss coming in their bowl game to Western Kentucky by a final of 48-49. CMU’s bowl game loss against the Hilltoppers was the most exciting game of the year in 2014. The Chips will bring in new head coach John Bonamego to take over for Dan Enos who’s moved on to from the program.

The Chips return 6 players on offense including QB Cooper Rush who’s entering his junior year. Cooper looks poised to have a better season after throwing an incredible 7 TD passing in CMU’s bowl game last season. The WR position losses Titus Davis, but the Chips certainly aren’t lacking in depth or potential at the position. The RB position seems like a wide open battle with Lavallii, Walker, and Spalding all likely to get their fair share of touches this season. The Chips have to replace a couple pieces on the O-line, but this unit should be adequate.

After using the 4-2-5 scheme under Enos, CMU will make a transition back to the 4-3 this season under Bonamego and DC Greg Colby. Central Michigan had the best overall defense in the MAC a season ago and despite needing to replace 5 starters this unit also return some key pieces. The D-line will be led by returners Serpa and Ostman. LB has some holes to fill with Tim Hamilton looking to step up and take on a larger role. Safety is the strength of the defense and the secondary returns three starters overall.

Prediction: It can be tough to forecast for a team that has a new head coach mixed with nearly half of their starters needing to be replaced from last season. CMU is also in a division that’s on the rise and as a result the Chips will likely have a tough time getting back to a bowl game. If Cooper Rush takes a big step forward this season that might be the only way CMU finishes in the upper half of the MAC West. Going against a brutal schedule it’s tough to make a case for more than five wins for the Chips.