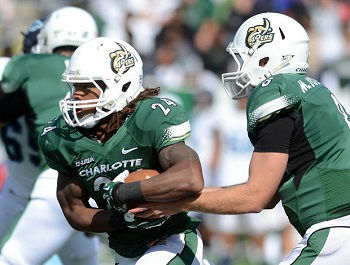 Preview: The Charlotte 49ers will make an exciting transition into the FBS this season and many aren’t expecting much from a team that’s gone just 10-12 overall in the last 2 years under head coach Brad Lambert in the FCS. The 49ers have a lot of recruiting to do before they can compete near the top of Conference USA, but this team could surprise given their number of returning players.

Charlotte should find their strength on the offensive end where they employ an up-tempo offense. The RB position is set for success with Kalif Phillips coming back after at 1,400 yard campaign mixed with an O-line that is loaded with veteran experience. WR is also a position ready to produce with top receivers Duke and Bostick back along with the addition of former highly touted recruit LeMay. The QB position will be up for grabs with Johnson, McNeill, and Barden all having a shot to earn the job.

The 49ers were porous on the defensive side of the ball last season and the program is hoping DC Matt Wallerstedt can help fix some of the issues. The defense will keep their 3-4 scheme and even though 10 starters return, this unit is still lacking for quality depth. The D-line looks to be steady with Devon Johnson returning from injury and Josh Manley coming over from Syracuse to join returning sack leader Ogunjobi. The backend of the defense will look to build around LBs Cook and Clayton-Molby along with DBs Dozier and Pearson.

Prediction: Charlotte looks to make a successful transition into the FBS and this team could be better than expected given their veteran roster mixed with some FBS transfers.