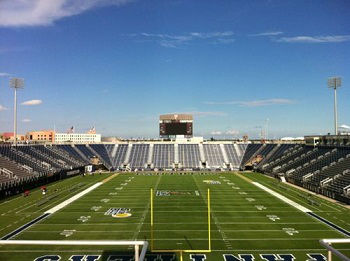 Preview: Head coach Ron Turner is starting to slowly turn things around at FIU as the team started to build some momentum down the stretch run of 2014, despite coming up just short in a number of games. Under Turner the team went from winning 1 game in 2013 to 4 last season and the program appears headed in the right direction with 16 players coming back.

The young QB Alex McGough won the job early on in the process and he should only continue to get better in his second season under center. McGough had some standout games in 2014 and he’ll look to have these types of performances on a more consistent basis. The O-line returns key guys like Budwig and Nielsen, but this unit has proven to be better at block for the run than the pass. FIU loves to run the ball and they have plenty of talent competing for play time at the back position with Samuel and Gardner. TE Jonnu Smith was a key part of the pass game in 2014 and that’s likely to be the case again this year with attrition at WR.

FIU was pretty solid on the defensive side of the ball in 2014 and with 8 starters back the Golden Panthers look to build off of their momentum. The D-line is in good shape with just one starter needing to be replaced. The strength of the line comes on the ends with Perine and Wakefield leading the way. FIU will also be solid at LB with all of their top contributors coming back. Cornerback will be headlined by the talented Richard Leonard, but safety is in flux with Perkins and Halley moving on.

Prediction: A bowl game isn’t out of the question for the Golden Panthers given their manageable schedule and we’ll get an idea of where this team is at after their opening road games against UCF and Indiana. If McGough takes another step forward in his progression mixed with the defense continuing to improve this could be a surprise team in the AAC.