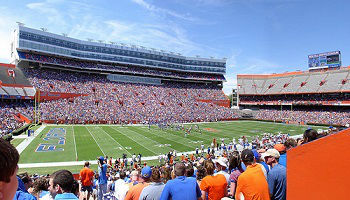 Preview: Florida decided to move past the Will Muschamp era and they went a little bit outside of the box hiring Jim McElwain who did a great job during his time at Colorado State. The hire didn’t do much to excite the fan base, but McElwain will get an opportunity to start proving himself right out of the gate.

McElwain is known as an offensive coach and Florida felt like they had to go this route after the failures of the defensive minded Muschamp. The first major decision will be at QB with McElwain needing to decide between Treon Harris and Will Grier. With an inexperienced offensive line having the dual threat ability of Harris behind center might be the better option, even if pocket passer Grier is the better fit with McElwain’s offense. The run game could struggle to get going behind a thin offensive line as well, but backs Taylor and Scarlett are both brimming with talent. The receiving corps is headlined by Robinson and McGee.

The defense hasn’t been the issue for Florida in recent years and McElwain is hoping he can bring similar success to the Gators’ program on this side of the ball. The front seven of the defense has holes that need to be filled, but the D-line should be led to success by returning players Bullard and Cox. The real strength of the Florida defense is found in the secondary with significant talent and experience returning. The secondary returns 3 starters including Hargreaves who will soon be in the NFL.

Prediction: Even though 2014 was considered a letdown for the Gators they still found some success going 7-5 overall with a bowl win coming against ECU. The Gators might not be as solid this year on defense, but the offense is expected to make some progress under McElwain. To expect a better season than 2014 might not be realistic under a new coaching staff and the Florida faithful won’t like that one bit.