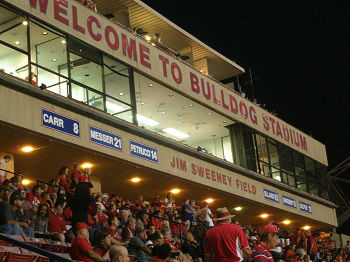 Preview: Fresno State was very streaky last season taking advantage against the weaker portions of their schedule to reach bowl eligibility. The Bulldogs finished the season with a 6-30 bowl loss against Rice to finish 6-8 overall. Fresno State is still looking for answers on both sides of the ball, but this team is aided by playing in the weaker West division of the MWC.

Fresno State had a tough time settling on a starting QB last season and with their primary starter Brian Burrell moving on the position is still in flux. The battle for the next starting QB comes down to Greenlee, Anderson, and Virgil, and these guys will continue the battle through August. The O-line returns three seniors with plenty of experience and this unit is headlined by tackle Alex Fifita. The strength of the offense will be with RB Marteze Waller who picked up over 1,300 yards last season. The WR position losses top target Josh Harper and the team is hoping Peck can step up and fill the void.

The Fresno State defense is in need of a makeover given the struggles of last season’s squad mixed with the unit losing standout players Davison and Smith. DC Nick Toth put nearly every spot on defense up for competition hoping to inspire his guys to put in the extra work needed to improve. The only guy locked into his spot next season will be LB Kyrie Wilson who will be a tackling machine in 2015. He’ll be helped in the backend of the defense by Ederaine and Washington who’re hoping to stay healthy after dealing with injuries. The D-line is undersize and it’ll be interesting to see how this unit is able to standup against the run this season. The secondary has been inconsistent, but the unit returns depth and experience.

Prediction: Being in the weaker West division at least gives Fresno State a shot at competing for the conference just like in 2014. Don’t be surprised to see a similar output from the Bulldogs in 2015 with making a bowl game being the end goal. This squad doesn’t have the returning talent to be serious threats against the tougher teams they’ll face.