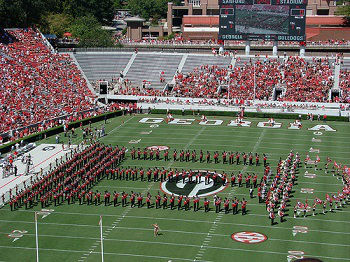 Preview: The Georgia football program has experienced sustain success under head coach Mark Richt as the team is an impressive 136-48 during Richt’s 14 years as the head man. The Bulldogs quietly had a great 2014 going 10-3 overall including an impressive 37-14 bowl win coming over Louisville. The Bulldogs are still looking for answers under center and the schedules toughens this season with crossover games coming against Auburn and Alabama.

For the first time in a long time Georgia will have question marks at the QB position coming into the season. The battle is between Ramsey and Bauta with the competition likely to work itself out in the fall. Another area of concern comes at WR where the only proven returning guy is Malcolm Mitchell who’s had to deal with injuries. The strength of the offense is without question in the run game. Georgia returns RB Nick Chubb who broke out last year for over 1,500 yards and that’s after starting the season behind Todd Gurely. Chubb will throw his name into the Heisman conversation right away. The O-line also became a strength last season and this unit returns 4 starters.

The Georgia defense made significant strides last season under Pruitt and this unit looks to be a strength again in 2015. The linebacker position is loaded with talent as future NFL guys Floyd and Jenkins lead the unit. The D-line was solid, but not overwhelming in 2014 and the unit will be elevated by top recruit Trent Thompson in the coming year. The question marks come at inside LB and corner, but the team is hoping they have the pieces to fill the gaps. Georgia has the potential to be one of the better defensive teams in the country if their question marks can be answered.

Prediction: Georgia has the potential to make a run at the SEC East title this season if their new pieces on offense can hold up the fort for the run game to dominate. The defense has solid building blocks and if the new guys can fill in this unit has the ability to continue to improve under DC Pruitt. A January bowl game should be the goal for this team with an outside chance at making a run to the playoff.