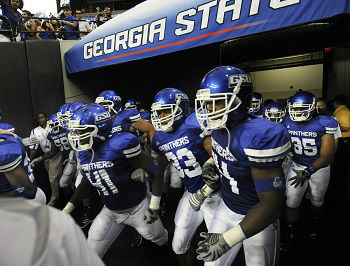 Preview: It’s been a bumpy ride for head coach Trent Miles as Georgia State has compiled just a 1-23 record in his two seasons as the head man. The Panthers have yet to record a win against an FBS opponent during this stretch with their lone victory coming last season by 1 point against Abilene Christian. With 17 returning starters this group is hoping to show some progress in 2015.

Georgia State was able to compete in more games last season given some of the success they found in the passing game. The Panthers return many of the key pieces to this part of the offense and that starts with senior QB Nick Arbuckle who was up and down throwing over 3,200 yards last season, but Nick has to cut down on the turnovers. The run game was awful last season, but the Panthers are hoping to improve in this area with Kyler Neal coming back from injury. The majority of the WRs return including lead man Harden.

The Panthers were downright awful on the defensive side of the ball in 2014 and the unit is hoping to show some improvement this year with 9 starters back. There isn’t a band aid to fix this unit except through internal growth and returning experience. Georgia State is looking to be stouter up front with transfers like Laurent and McGee adding to some of the key returnees like Shaw, Bryant, and Peterson. The Secondary also has some depth with the addition of transfers Campbell and Baker.

Prediction: There should be slight gains for this program as they continue to increase their number of players on scholarship mixed with a bevy of returning players. There are still issues with a lack of size in the trenches, but this squad should be able to turn some of their close losses from last season in conference play into wins this go around. Look for the Panthers to make incremental steps forward in 2015.