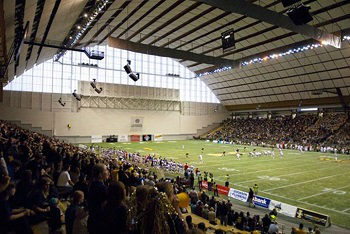 Preview: It was a struggle again last season for Idaho as they finished the season 1-10 overall with their lone win coming at home against New Mexico State. Idaho has a tough schedule in front of them this season and with 13 returning starters it’s going to be tough for this squad to improve, even after coming off just a 1 win campaign. At least on the bright side this squad did show considerable gains in 2014 after 2013 being an embarrassment for the program in terms of blowouts losses endured.

On offense Idaho showed gains in 2014 and the Vandals return starting QB Matt Linehan who had an inconsistent campaign. Linehan didn’t have a lot to talent to work with, but he still needs to cut down on the turnovers if the Vandals are going to get past the 1 win mark. The O-line is a question mark again this season as the unit is very young and needing to replace their solid center Marboe. The RB position is set with the one-two punch of Penny and Duckworth who bring different running styles. Linehan will have some better options in the pass game this season with the return of Dezmon Epps who was kicked off the team last season.

Idaho had one of the worst defenses in college football last season and as a result the team will be switching to the 3-4 scheme to better suit their roster. The D-line will be anchored by Bradley and Edwards who’re returning players. The LB group looks to lead the defense with top returner Millian being joined by newcomer Elliss who has NFL roots in his family. The secondary will be a work in progress as the unit looks to build around guys like Jordan and Siavii.

Prediction: It’s been three straight 1 win seasons for the Vandals and the goal for this group should be getting past that mark in 2015. Idaho has winnable games on their schedule playing in the Sun Belt and we’ll get an idea of where this team is at after they play their home game against FCS Wofford in mid-September.