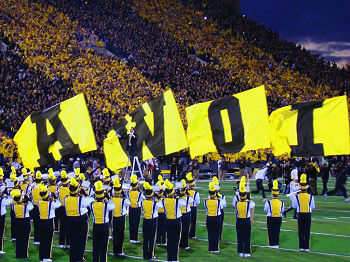 Preview: The Iowa football program has been steady under Kirk Ferentz who’ll be entering his 17th season as the head coach. During his tenure Iowa has been a consistent participant in bowl season, but the fans want more than mediocrity. Under Ferentz the team has gone 115-85 over the past 16 seasons. Reach a bowl game will be the goal again this season with Iowa reaching postseason play in 12 of their last 14 campaigns.

Former Iowa starting QB Jake Rudock decided to transfer to Michigan during the offseason and the former Iowa product will look to get some grooming by coach Harbaugh prior to entering the NFL draft. Part of the reason Rudock transferred was because C.J. Beathard past him on the depth chart after proving himself worthy towards the end of the season. Beathard has a canon for an arm and he’s much more aggressive on the field than Rudock. The O-line returns 3 starters and is expected to be solid again in 2015. RB Mark Weisman has moved on, but there shouldn’t be any dropoff with Daniels and Canzeri taking more snaps. The receiving corps will be led by veterans Tevaun Smith and Jake Duzey.

The defense disappointed last season, but the unit is expected to improve with some key pieces to build around. The D-line returns 2 starters with the most notable face being All-Big Ten DE Drew Ott who should be tough to deal with in 2015. The LB position had to play a lot of youth last year and the guys that were forced into duty will look to take a step forward in production this season. The secondary returns 3 starters and this unit is billed as being the strength of the defense with All-Big Ten CB Desmond King to build around.

Prediction: Iowa has been stuck in mediocrity over the past few years and it seems like that will be the case again this year unless Beathard is even better than expected. Iowa has some nice pieces to build around, but there are too many question marks at this point to consider this squad a legitimate threat to win the Big Ten West.