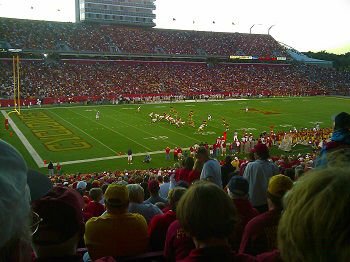 Preview: Iowa State’s head coach Paul Rhodes hasn’t had a ton of talent to work with through his 6 years, but he gets credit for getting the most out of his players. Over the past 6 years Iowa State has gone 29-46, but the team has fallen off going 5-19 over their past two campaigns. The momentum of the football program is going in the wrong direction and it’s going to be tough for this group to bounce back given their tough conference slate.

Iowa State was less than adequate on offense last season, but there’s reason for optimism with Mangino’s system fully in place along with QB Sam Richardson being back for another go around. The Cyclones have battled injury issues on their O-line in recent years, but because of that this unit now has a lot of players with experience. RB is in flux with the top two performers from last season moving on. RB will be led by Brown and Warren who’re both underclassmen. WR is a position of strength with talented guys like Bundrage, Montgomery, and Lazard in the fold.

The defense was downright awful last season, but there’s nowhere to go put up for this unit in 2015. The D-line returns experience and the addition of transfer Tucker will help bolster the unit in the middle. LB remains an issue with the unit having to work past the injuries of key players. The coaching staff is hoping to get a lot out of former JUCO player Jordan Harris who’ll be the man in the middle. The secondary should be decent with both starting corners back along with Big 12 Freshman Defensive POY Cotton-Moya back at safety.

Prediction: Iowa State should be better in 2015 than they were last year if they can stay healthy. The offense should be in synch with both OC and starting QB back for another go around. The defense should be better, but this unit still isn’t good enough to consistently slow down many of the offenses in the Big 12. A 6 win campaign is likely out of reach, but the goal of this team in 2015.