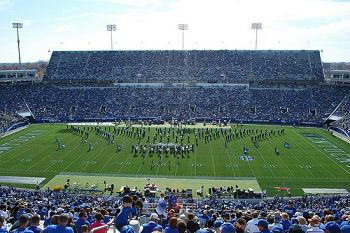 Preview: Mark Stoops took on the herculean task of trying to turn around a program in the SEC and to his credit he’s done all the right things to put the Wildcats in a position where they can compete. Stoops has recruited historically well at Kentucky and there was noticeable growth for the Wildcats in 2014 picking up 2 wins in conference play. The ultimate goal for this group in 2015 will be taking the next step and reaching bowl eligibility.

Kentucky will look to continue their air raid offense as they bring in West Virginia OC Shannon Dawson to replace Neal Brown who took the head coaching gig at Troy. Right now the QB competition appears fairly even between Towles and Barker, but Towles experience as the starter in 2014 has to give him the edge at this point at least based on experience. The O-line should continue to improve with 4 starters returning to a veteran unit. The RB position is also set with returning players Williams and Kemp manning the ship. WR also isn’t lacking for depth either with Timmons leading a unit that will bring along underclassmen like Baker, Bnoe, Badet, Johnson, and Conrad.

The defense has to replace two of their star players on the D-line with Dupree and Smith moving on, but the unit as a whole still looks formidable with other experience returning along with the addition of some key transfers. Along the D-line Kentucky is excited about the potential of JUCO transfer nose tackle Melvin Lewis who’s a big body to clog things up. The LB position will be led by transfer Ryan Flannigan and former touted recruit Jason Hatcher. In the secondary the safety position is set with depth and experience as Stamps leads the way. There’s some concern with the production at CB, but this unit also returns starters Quinn and Tiller.

Prediction: Kentucky has a brutal schedule, but it would be even tougher if they played in the SEC West. Kentucky’s crossover games will come against Auburn and Mississippi State. The nonconference slate for the Wildcats looks like 3 wins for sure with a tossup coming in their home game against Louisville. If Kentucky can get 3 nonconference wins all they need is to improve on last season’s SEC win total by 1 game to reach bowl eligibility.