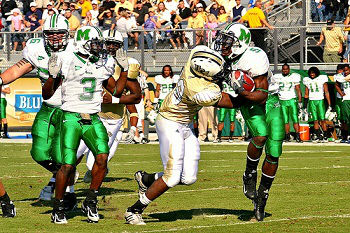 Preview: Marshall had a 2014 to remember as they went 13-1 overall with their only loss coming to Western Kentucky in OT by a final of 66-67. Even with having one of the best seasons in school history the Thundering Herd were still disappointed that they didn’t get a chance to prove themselves in a January bowl game. After last season’s success Marshall is now 40-25 in their 5 season under head coach Doc Holliday. Marshall has enough talent to compete for the CUSA title again in 2015, but they won’t be a shoe in with QB Rakeem Cato moving on.

Having the unenviable job of replacing 4 year starter Rakeem Cato at the QB position will be James Madison transfer Michael Birdsong. Cato threw for almost 15,000 yards and 146 TDs in his decorated career, but the team is hoping the physically imposing Birdsong will be able to keep this team headed in a positive direction. Marshall has experience along most of the O-line, but the inexperience comes at LT which is the most important position for a pass heavy attack. Marshall is loaded with talent at the skill positions. The RB group will be led by veterans Johnson and Watson, while the WR corps is led by familiar faces Allen, McManus, and Jean-Louis.

Marshall’s defense has come a long way under DC Chuck Heater, but this unit will likely take a step back in 2015 with only 5 returning starters. The defensive front is in search of a pass rusher who can make some plays. The coaching staff will lean on transfer Keller along with Thompson and Massaquoi to get pressure on opposing QBs. The LB corps is a clear strength for the defense with transfer Petty joining proven players Hunter and McKelvey on the unit. The loss of top CB Roberts hurts and this unit will look to guys like Baxter, Williams-Hall, and Rowe to step up.

Prediction: The offense should continue to put up big numbers as long as Birdsong can live up to his billing. The skill positions are still loaded with experienced talent which will make the Thundering Herd a force to be reckoned with in conference play. Marshall will push for the conference title again this season, but they’re no longer the runaway favorites. We’ll get a good idea of what direction this team is headed after their opening home game against big Ten foe Purdue.