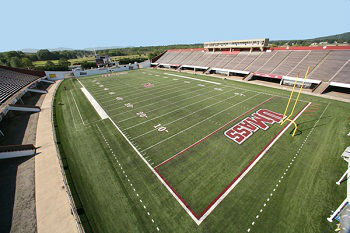 Preview: UMass hasn’t had a very successful transition into the FBS, but the team made noticeable strides on the offensive side of the ball in 2014 on their way to going 3-9 overall with all 3 wins coming in conference play. The Minutemen will look to take a big step forward this season as the roster returns 19 starters to what will be one of the most experienced teams in the MAC. With the team ready to take the next step forward this group should have their sights set on a bowl game in 2015.

The passing game has completely transformed for the Minutemen over the past couple of years and this unit is set to put up huge numbers this season. The QB position is set with the return of Blake Frohnapfel who threw 23 TDs before going out with an injury towards the end of last season. Frohnapfel led the MAC in passing yards per game before having to sit out the final two conference games. The O-line should continue to improve with all 5 starters returning. The RB position was a revolving door in 2014, but with all 4 guys back the unit will look to find consistency. The receiving corps also returns practically everyone and this unit will be led by All-MAC performer Tajae Sharpe.

The defense was clearly the weakness of the team in 2014, but with 9 starters back this unit is hoping experience will help them improve in 2015. The D-line was exposed against better O-lines in 2014, but the unit will hope to be better with big man Robert Kitching taking over in the middle along with returners Angeh and Holines coming back. The LB position looks to be solid with returning tackle machine Santos-Know being joined by previously injured Shane Huber. The secondary was gashed for too many big plays last season, but this unit looks to play more fundamentally sound as they build around all-conference CB Jette.

Prediction: UMass will be leaving the MAC after this season and this is the Minutemen’s last chance to compete for the conference crown prior to becoming an Independent. Having one of the most veteran teams in the league will certainly help as UMass has a legitimate chance to make it to their first bowl game as an FBS school. Even with a fairly tough nonconference schedule the Minutemen have the talent to make a significant jump in the MAC and perhaps even get 6 wins in league play alone.