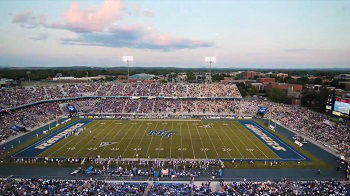 Preview: MTSU was left out of a bowl game despite being bowl eligible in 2014. The Blue Raiders finished out the season losing 3 out of their last 4 games to land 6-6 overall with their best wins coming against Western Kentucky and UAB. Head coach Rick Stockstill has had moderate success during his 9 years as MTSU’s head coaching going 57-55 overall. MTSU hopes to have more success this season with 13 returning starters, but an early season matchup against Alabama could beat this roster up prior to conference play.

Even though MTSU returns their starting QB from 2014 the battle for the starting position in 2015 will likely go into the fall. QB Austin Grammer is back and he’s a dual threat, but lacking in passing proficiency. Coach’s son QB Brent Stockstill is a better thrower than Grammer, but he doesn’t have the running ability. The offense hopes to get better through the air in 2015 to discourage opponents from loaded up in the box like they did down the stretch last season. Whoever plays QB will work behind an O-line that returns 3 starters. The RB also returns experience with guys like Parker, Tucker, and Bryson looking to get their share of carries. The receiving position is a bit thin for talent and this unit will be built around proven player Ed Batties.

The defense will work around 7 returning starters to a unit that will likely be better against the run than pass in 2015. The D-line returns a bevy of experience in the middle, but this unit is lacking for playmakers at the end position which is why JUCO transfer Peter Bailey was brought in. The LB spot will be led by top returner T.T. Barber who has a nose for racking up tackles. The secondary is a position of concern outside of safety Kevin Byard who’s been a consistent performer. The secondary gave up too many big plays last season and the unit is looking for more depth and talent to put around CB Jared Singletary.

Prediction: MTSU has been consistently solid over the past half-decade and this unit will look to get back to a bowl game in 2015. The schedule will be tough for the Blue Raiders early on with nonconference games coming against Alabama, Vandy, and Illinois. The Blue Raiders will also get big tests early on in conference play from Western Kentucky, Marshall, and Louisiana Tech. Even though this MTSU squad is loaded with veteran players a tough schedule will make it difficult for this squad to get to bowl eligibility in 2015.